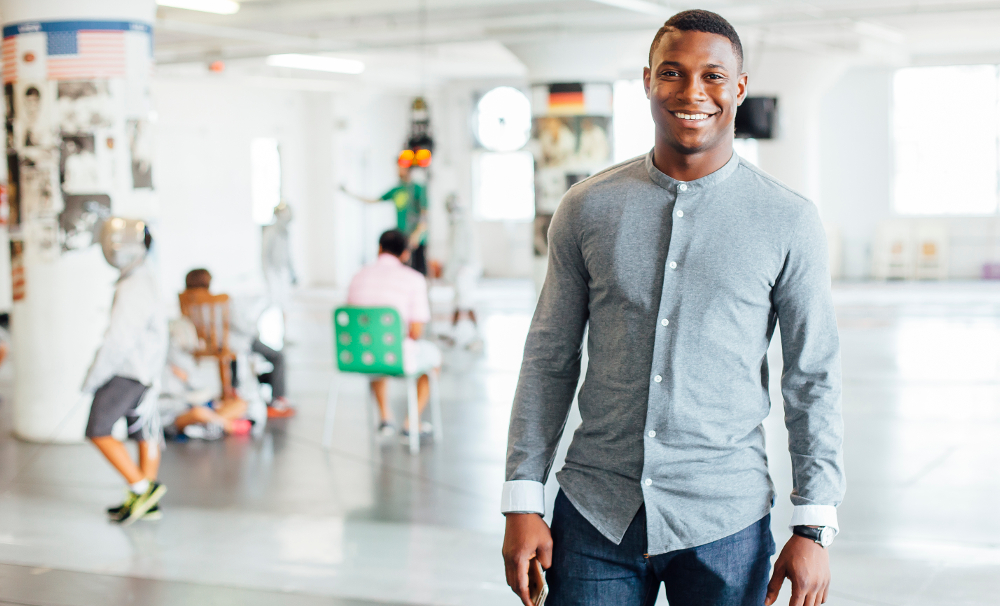 This mindset and relentless pursuit towards excellence has lifted Homer to reach Global heights. This past summer Homer made history as he won the first individual World Championship in Moscow, Russia. “It was an amazing feeling to stand on the podium in one of the birthplaces of fencing during such a crucial competition for the Olympic Qualification,” Homer tells BE Modern Man. “It gave me confidence not only in my athletic ability, but also in my ability to inspire and play a roll in redefining what a good fencer is and looks like.”

What a good fencer is and looks like does not fit the stereotype that the majority of the world holds. Homer is defying this image as he pursues a non-traditional career path which is unchartered and not mapped out. He says, “This freaked me out, but now I am happy with my decision. I’ve experienced newfound levels of success and focus”

It takes a special individual to take their passion and turn it into purpose despite the seemingly insurmountable obstacles that stand in the way. “You must have an uncompromising vision of who you are, what you want to accomplish, and map out the steps to get there,” Homer tells BE Modern Man. “Too often we get lost in other people’s perceptions of our accomplishments, or how we’ll be perceived if we go against the grain. When I set my mind to it, success came immediately.”

With a network of African American Male professionals working in multiple fields, Homer still sees a gap in the representation of his peers throughout mainstream media. “I can say that I have a heterogeneous network, but how many young men in the inner city can say the same? This type of exposure sets a good example for our community, inspires youth and demonstrates that you can create your own career and monetize it by following your passion.”

As his platform grows Homer would like to take the work he’s done with bringing fencing to the mainstream to a larger more global level. Teaching clinics in Africa, the Caribbean, and impoverished communities in Europe are all being mapped out. “Within my own community I fully understand that I am a role model and a success symbol,” says Homer. “The first thing I tell people is that I’m just a kid from the Bronx. Strip away all the accolades and that’s what I am at my core. With that being said my narrative shows that regardless of where you come from success is possible. It’s all about exposure to the right things, and making smart choices.

For each story told a BE Modern Man may save one life, give another child inspiration, or possibly expose parents to something new. For Homer, a BE Modern Man is a man who aspires to change, who isn’t afraid to go against the status quo, and is willing to be a symbol. “He strives to be excellent in all facets of life, and has an insatiable appetite for supporting himself and his community.”

The BlackEnterprise.com team congratulates Daryl Homer on all of his success, and more importantly for being a trailblazer in our community. Taking on the responsibility to diversify the sport of fencing is a major task and will be met with skepticism. But as Daryl Homer vehemently says, “I am a saber fencer. I was built for this.” We look forward to watching and supporting him along his journey