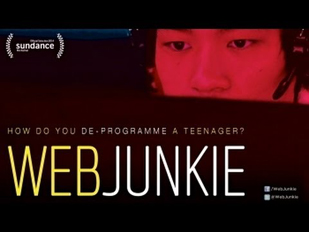 Daxing Boot Camp – it’s the real life version of what happens after you toss back Morpheus’ red pill. It’s also the filming location for the Chinese documentary “Web Junkie,â€ which will be airing for the first time on PBS July 13, 2015.

The film documents the journey of three boys who are enrolled at Daxing Boot Camp, a center in Beijing that offers treatment to an affliction known asÂ wangyin,Â or Internet addiction. According to the film description on PBS.org, there are more than 400 similar treatment centers created by the Chinese government, which is the first country to identify the behavior as a clinical disorder.

The film by award-winning Israeli filmmakers Shosh Shlam and Hilla Medalia follows cadets through a three-month military style, anti-addiction program in Beijing designed for patients 13 to 18 years old. “Web Junkie” portrays the rehabilitation process and the evolving diagnosis behind it.

While many Chinese complain that these camps are government weapons to censor free expression–which the Internet has been an accomplice to–when kids make statements like “Reality is too fakeâ€ or when they wear diapers to avoid interrupting a MMORPG (Massively Multilayer Online Role Playing Game) it’s easy to see why parents are taking drastic measures.

A description from PBS.org reads: “There is nothing virtual about the treatment center, which resembles a Marine Corps boot camp far more than a typical Western clinic. Patients are under constant surveillance–even as they sleep. Rigorous exercise programs are augmented by group therapy, brain scans and classroom instruction. In one class, an instructor explains that Internet addiction blocks the normal development of the social part of the brain. This does not necessarily convince the patients, one of whom calls the classes an attempt at ‘brainwashing.’â€

Last year, America’s Diagnostic Statistical Manual included “Internet Gaming Disorderâ€ in an appendix, but called for more research “before it might be considered for inclusion in the main book as a formal disorder.â€

Even still, Americans seem also to struggle with a compulsion towards overindulging in the World Wide Web; especially as it pertains to binge-watching streaming video. A survey conducted byÂ Netflix in February 2014, found 73% of people define binge-watching as “watching between two and six episodes of the same TV show in one sitting.

Is Internet addiction a clinical condition and a growing social problem? Only time will tell.