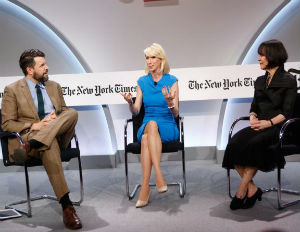 Although the person most likely to be found reading a book is a college-educated black woman, I don’t read as much as I’d like. Or I read oddball stuff that most other people don’t, at least not for pleasure–such as my son’s freshman sociology textbook (yes, I am reading it right now and finding it fascinating).

But after attending the New York Times Higher Ed Leaders Forum, my reading list has suddenly gotten longer. Many of the speakers and panelists were published authors whose books I now consider must-reads.

Moderated by New York Times Senior Editor of Live Journalism Charles Duhigg, the panel explored how peak performance and maximizing motivation can be applied to the world of education. Cuddy and Dweck shared the latest scientific findings.

In the session, Cuddy, who teaches a course called Power and Influence (which she said is basically social psychology) described the need for students to learn that connecting with others is critical to effectively leading them.

“Just being excellent is not enough–alone, it’s useless,â€ Cuddy said. Warmth and confidence are what enable leaders to lead effectively.

Cuddy also spoke of how women “don’t feel as if they can take up space in a roomâ€–a kind of physical indication of their diminished sense of power.

She also noted that when her students hear the word “power,â€ the next word they think of is “corrupts.â€ She quoted Robert Caro, the biographer of Lyndon Johnson, who said, “Power doesn’t always corrupt, but it always reveals.â€

Dweck spoke of the importance of the “growth mindset,â€ the critical work she’s done that shows how believing in your ability to change and improve over time creates possibility. Compared to students that have a fixed mindset, which doesn’t believe in or accept the possibility of growth or change, students who have a growth mindset work hard to improve–and get results.

“Math ability can be developed,â€ she said.

With a growth mindset, students who are new to college can also develop competence in navigating school and acquire effective study skills.

“They can improve incrementally without going into flight, fight, or faint mode,â€ Dweck said. She described failure as a part of learning.