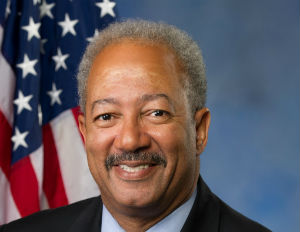 Today, Rep. Chaka Fattah (D-PA) has pleaded not guilty in a federal racketeering case, according to reports.

He told the judge, “I haven’t committed any crime.”

The Philadelphia Democrat, who has been in office for 11 terms, says he will fight the charges stemming from a 29-count, July 29 indictment that includes racketeering conspiracy, bribery and mail fraud.Â Prosecutors say he used funds from federal grants and charitable donations to pay off a $1 million illegal campaign loan, and that he also used campaign funds toward his son’s student loan.

Fattah, 58, was released Monday on $100,000 bail, and he has surrendered his personal passport but can travel overseas for work via a diplomatic passport.Â He’s keeping his Congressional seat but has stepped down as the top Democrat on the House Appropriations subcommittee that oversees spending for commerce, justice, science and related agencies.

His son, Chaka Fattah Jr., is also facing indictment in a related case that has been launched by the same prosecution team.

U.S. News & Report indicates Fattah has said he plans to run for a 12th term next year and remove “the cloud from my very good reputation.”

“I understand their desire to come after me … but to take innocent people, to take people in my family and to smear their good name–that says a lot about character, so I think that’s the most unfortunate part about this entire process,” Fattah said after his court appearance.

An advocate for employment for at-risk youth and minorities, Fattah was co-author of the Urban Jobs Act of which theÂ National Urban League advocated for passage in its 2014 21st Century Agenda for Jobs and Freedom.