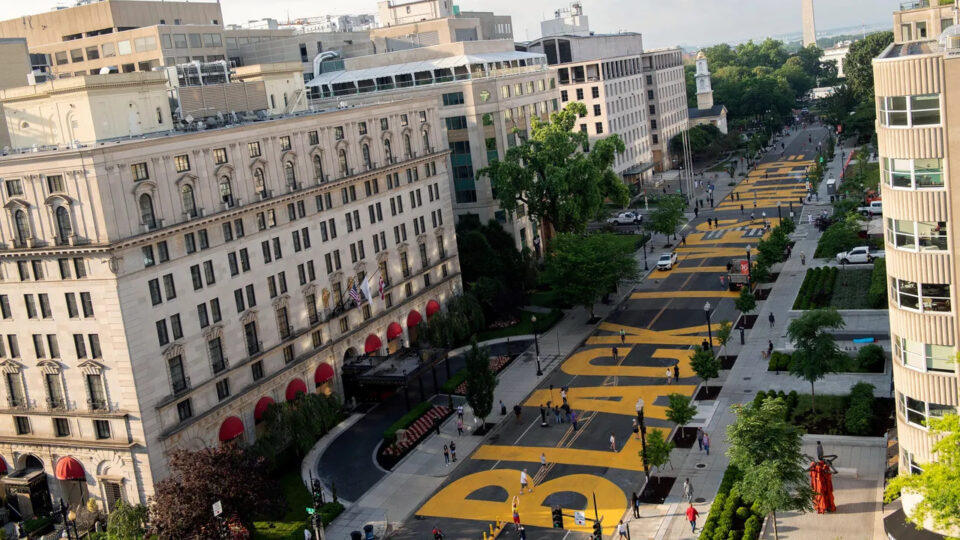 Photograph by Khalid Naji-Allah / Executive Office of the Mayor / AP

An unidentified member of the “People’s Convoy,” a mobile protest against vaccine mandates inspired by Canada’s Freedom Convoy, announced that he and the truckers’ movement will tar and feather the Black Lives Matter Plaza in Washington, D.C.

At the end of February, a group of American truckers set off on an 11-day convoy from California to the nation’s capital to hold a protest demanding that all COVID 19-related mandates are lifted across the country. But their demands grow beyond the pandemic, as they urge “Freedom Convoy 2022.”

In a video captured by The Daily Beast, a new goal was declared when the “People’s Convoy’s” group organizer Mike Landis passed the microphone to a speaker during one of its daily morning meetings. The speaker, who is unidentified, tells a crowd to “take back” the mural featuring the words “Black Lives Matter,” located along a two-block area of 16th Street NW in Downtown DC.

“What’s going to happen up here in D.C., Black Lives Matter Street, we’re going to take it back. All that paint’s coming off that street,” the speaker said. “Before I get put in my grave, it’s going to get tar and feathered.”

The yellow 50-foot-tall slogan was unveiled as an outcry against police brutality and in honor of the protests following the police killing of George Floyd. The pedestrian-only section of 16th Street NW, located just outside of the White House, was officially renamed by Mayor Muriel Bowser as “Black Lives Matter Plaza NW.”

In early March, members of the “People’s Convoy” made their way around the I-495 Beltway after D.C. police were prompted to close exits leading into the nation’s capital. The group were reportedly causing heavy delays as they attempted to carry out their plans to shut down all but one lane within the Beltway, according to DCist/WAMU 88.5.

DC Homeland Security and Emergency Management Agency (HSEMA) and Metro Police submitted a joint statement to The Daily Beast. In part, it reads, “As part of our layered mitigation strategy and enhanced preparedness posture, MPD has all the resources and necessary support they need to monitor and respond to any instances of illegal activity or harmful disruption.”