Photoshopped CoverGirl Ad Calls Out Domestic Violence in the NFL 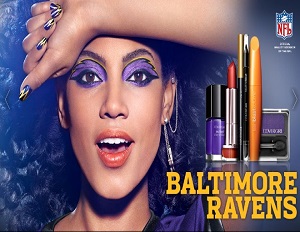 In the midst of the NFL dealing with its domestic violence scandals, one of the nation’s leading cosmetic brand, CoverGirl, is in hot water for continuing their sponsorship with the professional organization.

Following CoverGirl’s release of their ad campaign encouraging women to put their “game face on,” a photoshopped version of the exact same photo went viral, that suggested the NFL needs to be more aggressive in its handling of domestic violence cases and that Covergirl should reconsider its partnership.

RELATED: The 15 #GoodellMustGo Tweets You Should See

The original photo displayed a model wearing a purple jersey with purple wings around her eyes, as if to be representing the Baltimore Raven’s. The photoshopped photo featured the same model with a dark bruise around her eye, presumed to be a mark caused by domestic violence. PRNewser tweeted out the altered image below with the hashtag #GoodellMustGo, which is a trending hashtag on twitter that is encouraging the NFL to get rid of its current commissioner.

While CoverGirl quietly removed the original ad photo from its Pinterest page and deleted its NFL Collection page that showed glammed up looks for all football teams, the cosmetic brand has made no reported moves to end their sponsorship with the NFL. However, they did release a statement on Facebook speaking out against domestic violence in hopes to ease over the criticism they’ve been receiving.

“As a brand that has always supported women and stood for female empowerment, COVERGIRL believes domestic violence is completely unacceptable. We developed our NFL program to celebrate the more than 80 million female football fans. In light of recent events, we have encouraged the NFL to take swift action on their path forward to address the issue of domestic violence.”