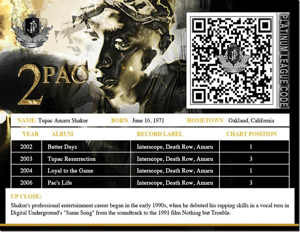 Combining his love and experience for music and sports, Green created the first interactive trading card collection, bringing artists and fans together worldwide. “When we started, we wanted to make sure everybody from every region [was represented],â€ says Green. “So you had to kinda pick and choose. We wanted to make sure the East was represented; the West; the Midwest; the South.â€ With hip-hop at the foundation, the interactive executive knew he had to recruit the biggest MCs that best represented this musical expression. “Who bigger on the East coast than Notorious B.I.G., so I shot for the biggest one.â€ He continues, “I was like, ‘Hey, let’s reach out to the estate and let’s see if we can get [Biggie].’ They loved him, and we were blessed to be able to get him.â€

While Christopher Wallace–also known as Biggie Smalls or Notorious B.I.G.–might sit as one of the most acclaimed rappers associated with The Platinum League, Green used his knowledge of the music industry to ensure every region, age group and demographic is represented. The lineup includes artists such as Scarface, Da Brat, 2Pac, Diggy, Snoop Dogg and Trina, among others. And if anyone is confused as to how an interactive card operates, it’s pretty simple.

A pack of The Platinum League trading cards can be purchased at Target, Walmart, Best Buy, Kmart, Toys “R” Us and other local retail stores. Each pack contains five trading cards plus a “sixth man.â€ Each artist’s card has a QR code on the back, which will need to be entered into the free Platinum League app. Once the code is entered, exclusive videos, freestyles and music, among other assets pop up. And according to Green, the exclusive content associated with the cards operates similar to Twitter–it’s up to each artist to dictate how much or how little content they produce for their fans. “You have some people that will tweet that they ate a ham sandwich today, and then some people won’t do nothing for a month. It’s all them,â€ says Green. “It’s their TV channel. I’m pretty sure some of them will be very active, and then some of them will [do] a little and then some of them will only change [their content] every three months when they’re required.â€

But while The Platinum League hopes the artists’ exclusive content will be the draw for true hip-hop heads, it’s the “sixth manâ€ card that will pull others to experience the interactive cards. In conjunction with the U.S. Sweepstakes, the sixth card in each pack reads, “You Win!â€Â  With every “winningâ€ card, fans will win “ringtones, music downloads, concert tickets, in-person meet-n-greets, backstage passes, $5000 birthday bashes, $300 pairs [of] sneakers, $300 pairs [of] Versace glasses, $1000 cash cards and a grand drawing of a 2012 Chevy Camaro every quarter.â€ Â Ultimately, as the chief executive puts it, “someone’s going to pay $3.78 [to] collect the hottest cards on the planet, of the hottest artist, and win birthday bashes, cash, sneakers…it’s the greatest sweepstakes ever.â€

With many artists already on The Platinum League’s lineup, there are many to be announced, and when he’s ready, the league hopes Jay-Z will also come on board.

To purchase your own pack of interactive trading cards, please visit theplatinumleague.com.