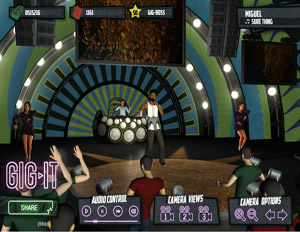 Play GIG-IT lets gamers pick an artist, dress him or her in signature streetwear and create a concert that can be shared with friends across Facebook (Image: Play GIG-IT)

Candy Crush Saga. Dragon City. Words With Friends. FarmVille 2. The list of games Facebook users have access to continues to grow, but there has yet to be a game that’s disrupted the original social gaming formula and given music fans an opportunity to take their listening experience to the next level. The founder and CEO of 212 Decibels, John Acunto, believes he has the answer.

Acunto and his team of developers is bringing a new and improved gaming experience to Facebook, one that even hardcore console gamers can appreciate. Â Available to Facebook users on Monday, Play GIG-IT is a social game that allows players to create customized 3D concerts that feature virtual adaptions of more than 60 artists and share their concert creation with friends and followers on the social networking site. The lineup of artists includes hip-hop heavyweights like Nasir “Nass” Jones, Dwayne “Lil Wayne” Carter, Jr., Onika “Nicki Minaj” Maraj, Tauheed “2 Chainz” Epps and William Roberts II, most-commonly known as Rick Ross, as well as R&B crooners such as Shaffer “Ne-Yo” Smith, Miguel (Pimentel), Jermih (Felton) and Gabrielle “Elle” Varner.

“Music has to find a home in technology,â€ Acunto said to BlackEnterprise.com. “Music is no longer this physical product that you box, package and sell. We’ve created something where it’s in a game format, but it’s everything music. It’s all about these major artists–it can be social, it can be fun. You can create your own version of how to visualize an artist in a concert setting. Then share it with my friends, talk about it, listen to it, jam with it”

Chris “Broadway” Romero, vice president of animation R&D at GIG-IT, walked a select group of journalists through GIG-IT’s social gaming experience. Given its completely customizable options, players can select their favorite artist, continent they will perform on, city, concert venue or arena and wardrobe, as well as pick from certain selections (i.e. special effects, deejay set placements, lighting and whether or not to perform with a band, among other options) that will take one’s performance to the next level. While some users may want to go all out, choosing the best of the best to make their performance flawless–and  likeable, they’ll have to have enough tickets. In this case, the more you have, the more options you’ll have to choose from. Although tickets are amassed throughout the gaming experience, players can purchase tickets to get more options. GIG-IT will be offering select packages, but the current price ranges from $20 for one ticket to $250 for 10,000 tickets. The platform allows gamers to create over 1 billion concert combinations in real time.

Players should keep an eye out for their in-game green (GIG cash). The more concert views you get, the more cash you score. In the future, GIG cash will give players exclusive perks such as concert and tour tickets and in-person meetings with artists, among other advantages.

But the experience isn’t all about the gamer. The artists involved stand to gain a great deal from this next-level game. It’s created a new revenue stream for musicians who haven’t otherwise profited in both the technology and music world.

“Every artist in our platform shares in the revenue, specifically their revenue,” said Acunto, chief executive at GIG-IT. “When you pick that artist, that artist makes money across the entire platform where his likeness and image is. So, the artists shares in that revenue stream.”

Play GIG-IT also allows players to purchase music straight from the platform, another revenue-generating function available within the game.

Liles, who is also an equity partner in the company, brings a great deal of insight to the advisory team given his experience in hip-hop gaming with video games like Def Jam Vendetta, Def Jam: Fight for NY and Def Jam Rapstar, among other games. Â The former Def Jam executive and longtime gamer is happy to be onboard this social gaming venture.Â  “I’ve been looking for a platform to participate in for the last couple of years and once I learned about what the folks at GIG-IT were doing…I thought it was the right fit.

Play GIG-IT will update by the second, giving players a real-world concert experience with the latest tracks, venues (think: the 2013 Rock the Bells stage) and signature clothing items like Crooks & Castles gear and Timberland boots.

The company is already working on its next product, a social-based karaoke game.