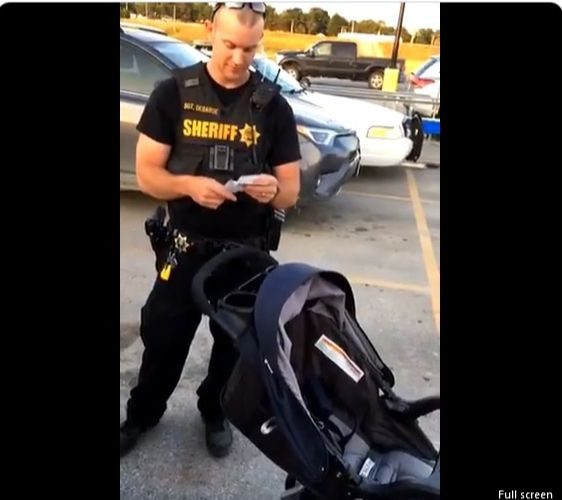 A Black family was accused of shoplifting from a Kansas Walmart by police officers as they were loading packages into the trunk of their vehicle, according to The Kansas City Star.

The incident occurred last week after 26-year-old Bracey Myles finished shopping with his fiance and their infant son at a Walmart in Holton, Kansas, when two police cars pulled up next to their car. Myles stated that when the cops approached, he put his hands in the air as the police officers told him and his fiance, Alfreda Lange, 20, that they’d been accused of stealing from the store.

The incident in the parking lot went on for about 20 minutes. Lange said their infant son was left in the hot car when the police officer told her that she couldn’t turn the car on to keep her son from overheating. At that moment, Myles said, he started recording the incident.

Somebody help me out I was racially profiled and publicly humiliated pic.twitter.com/fYtwtGOcH9

Myles stated that his son suffered a heat rash due to being in the car without any air conditioning as the police officers would not allow them to start the car so their son won’t get a heat stroke.

They made me keep my newborn son inside the car while they while they “investigated” I wasn’t allowed to even start my car..

The couple and their son just recently moved to Holton about a month ago. They said they were the only Black people in the store and feel they were racially profiled.

“Sometimes they don’t have to have a reason to bother you,” Lange said. “It’s not something that should ever happen. Going to Walmart to get groceries and you have to fear that ‘am I gonna walk out and the cops are going to be standing there because I’m Black and I was racially profiled.”

“I was really in disbelief that the cops were called on me for a grocery visit. I wanted it all to be over quick,” Myles said. “It seemed like they went out to humiliate and harass us.”