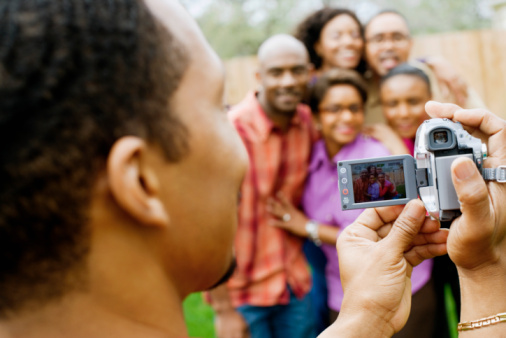 Let’s face it: Far too often, black men get a bad wrap in media.Â The Game Changers Project, a national media fellowship program, seeks to combat negative media portrayals of black men one four-minute video at a time.Â  Produced by the Forward Ever Media Center, the films are the creations of fellows chosen from eight different cities.

The selected group of fellows shoot four-minute “micro-documentariesâ€ about black men in their neighborhoods that are “changing the gameâ€ in various areas such as education, justice, entrepreneurship and fatherhood.Â  Past profiles have featured familiar names and faces like actor/activist Malik Yoba and award-winning filmmaker Byron Hurt, but many of the featured black men are not exactly names.

Oakland GCP Fellow and father of two sons, Shaka Jamal Redmond feels being chosen for this project was bigger than just an accolade on his resume. Â “I am determined to be abundantly selfless in the creation of the micro-docs, artfully revealing stories about spirited and dynamic Black men from my community that may otherwise go unnoticed,â€ Redmond said. “This fellowship is just not about promoting myself as a filmmaker, but promoting the contributions our people are making right now to our inevitable success.â€ Redmond’s film focuses on the life of Dr. Tommie Smith, a major figure in the civil rights movement due to the iconic photograph of him at the 1968 Olympics with his head bowed and his gloved fist in the air after he won gold in the 200-meter dash.

This is the second year of fellowships for the Game Changers Project and also the second year of partnering with NBC’s theGrio.com. “As a video-centric news site focused on telling stories that affect and reflect African-American experiences, theGrio.com is proud to continue its partnership with the Game Changers Project. We’re excited about surfacing many of these compelling videos on our platform,â€ said theGrio.com managing editor David Wilson in a press release.

Each applicant had to have a strong experience behind the camera and in front of a Mac computer to be selected for the Game Changers Project.Â  During the three-month fellowship, fellows received a stipend, orientation, training, cameras and assignments with organizations and subjects to produce work.Â  Founder of Forward Ever Media Center and executive producer of the Game Changers Project, Cheo Tyehimba Taylor, explained the selection process. Â “If there is any “formula” I use is at all, its work ethic + integrity + talent + X factor = GCP Fellow,â€ Taylor explained. Â “The 2012 fellows all had these things.â€

Another thing the 2012 fellows had this year was diversity as Taylor and his team selected a Black female and Latino male as part of the GCP team. Â “This was indeed intentional,â€ Taylor said. “I feel having both genders and other people of color involved in GCP will only make this program stronger and more universal in its impact.â€

New York City Fellow and first generation Dominican-American, Frank Lopez, felt that he relates to the young Black men he followed around on camera.Â  “Perhaps the only difference was the language our parents spoke at home and the hue of our skin,â€ Lopez said.Â  “We went to the same schools, we played on the same blocks and we definitely dealt with all the same social ills within our communities.â€

According to Federal Bureau of Prisons, as of May 2012, Black and Hispanic males combined count for almost 3/4ths of the U.S. prison inmate population (72.1%).Â  Startling numbers like that have motivated fellows like Redmond and Lopez to be game changers and tell the stories of people in their communities making a difference.