Power Women of the Diaspora: Ugandan Leader Talks Passion for Bridging Borders Between U.S. and Africa 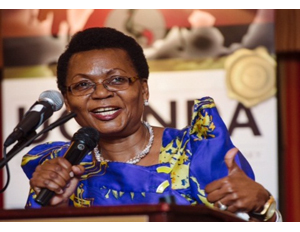 Oliver Wonekha, 63, knows more than a thing or two about holding her own in a male-dominated environment. The Ugandan politician and diplomat serves as the country’s Ambassador to the U.S. andÂ was a member of the Ugandan parliament representing women of the Mbale district.

She built her leadership, strategic planning, and business strategy skills as a successful professional for 30 years in an industry that accounts for the country’s leading export–coffee–before entering into politics. “To tap into the globally male-dominated politics and business, women must have ambition, education, hard work and actually join politics to vote and get voted for,” she says.

In her current role, she is tasked with strengthening U.S.—Uganda relations, supporting the country’s diaspora efforts, and sourcing investments.Â BlackEnterprise.com caught up with the busy power woman to talk about her career journey and how black women both in the U.S. and of the African diaspora can sustain global careers to make an impact.

BlackEnterprise.com: What’s the best part of your job in your role as ambassador to the U.S?
Wonekha: The best part is engaging with people in the U.S. Senate, Congress, Dept. of State, White House, sectors of trade and investment, tourism, academia, and other non-state sectors to improve understanding of my country and its prime location in the African continent and, hopefully, get them to support, invest, tour, or trade with Uganda.

Why did you get involved in politics, and why is it important for women to have an active voice in government policies and diplomacy?
I was born in rural Uganda on the slopes of Mt. Elgon, far from the city where policy and allocation of resources are conducted. I felt the need for more effective representation of the rural people, especially small holder farmers, traders, women, and other vulnerable groups. With women in politics, government, and diplomacy, there is a better chance that the issues that affect them are not only brought to the table but the women will also influence the relevant policies and allocation of resources for addressing those issues.

How has your office worked with the U.S. in terms of maintaining relationship, and what two key areas are you focused on in terms of partnerships and support?
My office has engaged in discussions and meetings and other officials of the U.S. government, private sector players like the Corporate Council on Africa, U.S. Chamber of Commerce, NGOs, academia, tourism industry organizations such as the Africa Travel Association and others. Uganda needs partnerships and support mainly in efforts of national and regional peace, security, stability and contending with violent extremism and secondly, trade and foreign direct investment. This is not to say there are no other areas.

How can African Americans and Africans of the diaspora experience Uganda and impact bridging the gap in terms of tourism and business opportunities?Â
Uganda is a beautiful country lying across the Equator. It is endowed with hospitable people, a large diversity of flora and fauna, more than 10 game parks and reserves, the largest number of bird species in the world. Uganda is concentrating on infrastructure development in terms of fast rail, roads, hydropower stations and of course, industry for agroprocessing. For African Americans and Africans of the diaspora, this is the time to engage seriously with the continent where 10 of the fastest growing economies are. When you decide to do that, begin with Uganda, a member of the East African Community, common market for East and Southern Africa and the African Union.