A Powerful Conversation on Schools, Poverty and Race 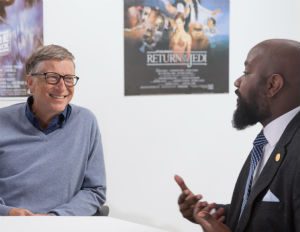 Nate Bowling was sitting in my office, talking about teaching. I consider myself a nerd, so when the Washington State Teacher of the Year used the word early in our meeting–and meant it as a compliment–I sat up a little in my chair.

“I joke about being a nerd farmer,â€ Nate said. “I’m trying to cultivate a kind of scholarship in students, and a passion for learning. So I bring passion to the classroom, and they see that and rise to the occasion.â€

I asked Nate why he’s so passionate about teaching. “It is a matter of life and death,â€ he said. “If my students are not successful in school, they end up in the prison-industrial complex.â€

Nate teaches at Lincoln High School in Tacoma, about 30 miles south of Seattle. Half of its students are African American or Hispanic.Â More than 70% are eligible for free or reduced-price lunch, which makes Lincoln a textbook example of what educators call the New Majority, reflecting the fact that more than half the students in American public schools today live in poverty.

Most of the New Majority do not graduate from high school ready for college or a high-paying job. So what happens at diverse, high-poverty schools like Lincoln matters a lot for the future of the country.

Fortunately, what is happening at Lincoln is quite positive. It has a graduation rate of 80%, above the average for Washington schools with similar demographics, and 40% of its students are taking Advanced Placement classes.

Nate is quick to give credit to his principal and fellow teachers. If his colleagues are anything like him, it’s no surprise that Lincoln’s students are doing well. Not only was Nate our state’s Teacher of the Year, he was also a finalist for National Teacher of the Year. He told me that all the students he advised in 2015—16 were accepted to college or vocational school.

“All kids can learn if they have the support,â€ he said. He teaches AP Government to 12th graders and–to my surprise–AP Human Geography to 9th graders. I wondered if it was risky, holding students who often can’t read at their grade level to the high standards of an AP class. But Nate doesn’t see it that way.

“I can’t teach the class like I would to a group of kids who were all on grade level, but those kids can achieve,â€ he said. “My principal and I have an understanding. We’re not concerned about kids passing the AP exam. We just want them to learn. I would rather have 100% of the kids in the most difficult class and have 25 pass the AP test, than have 25 kids in it and 100% pass.â€

Early this year, Nate got national attention when he wrote a provocative blog post titled “The Conversation I’m Tired of Not Having.â€ The post–a blunt look at the racial divide in America’s public schools–generated more than 1 million views and was reprinted in major newspapers. I read it before our meeting and agreed with a lot of it. I asked Nate about the response he got.

Much of the feedback was positive, he said. But not all of it. “The blog post revealed to me what people actually believe about my students,â€ he said.

As a case in point, Nate showed me a letter he received from a lawyer in New York state who had read his post. He keeps it as a reminder of the challenge that remains. “It’s basically laying out all the reasons why white Americans don’t want their students attending school with black Americans,â€ Nate said. “People respond to this letter angrily, but if I turned it into a set of policy recommendations, it would mirror exactly what we have in society today. It’s making the case for segregated schools.â€

I certainly agree that those of us who live in the suburbs by and large don’t see what’s going on in inner-city schools. It’s like two different worlds. This is one reason why Melinda and I get out and visit different schools around the country as part of our foundation’s education work, which is all about supporting the New Majority.

But even if the country improves integration and makes funding more equitable–which are important goals–we will still need to make sure every student has an effective teacher, and every teacher gets the tools and support to be phenomenal. I asked Nate how he thinks we can do that.

Part of the solution, he said, is to create incentives for outstanding teachers to stay in high-need schools. And that starts with recognizing that the demands of teaching in a high-poverty school are different from the demands of teaching in a wealthy one. It also means giving effective teachers autonomy. As long as they’re achieving results and teaching to the appropriate standards, he argued, they deserve leeway in choosing the curriculum that works for them and their students.

Of course, not all teachers start out equally effective. Nate knows that from experience. On his first day in the classroom 10 years ago, “I was terrified, and the students were bored. I look back at lesson plans I did five years ago and think, Man, they should have walked out!â€

That’s why he’s a big believer in professional development. “I believe in my heart that we can take average teachers and make them more effective and we can take effective teachers and make them outstanding,â€ Nate said. “One of the mistakes we make is that we think teaching is all about aptitude. You need a base level of aptitude to teach, but just because you have a Ph.D. in something doesn’t mean you’re going to be good at delivering content. Teaching is part content, part parlor tricks, and it can be taught.â€

Another thing that would help teachers, Nate said, is to “treat them like the treasures they are.â€ He co-founded an organization, Teachers United, to help teachers inform district- and state-level policies.

It was a powerful conversation. Nate is talking about some difficult subjects, but they are subjects we need to be discussing. Ultimately, I left feeling hopeful about what’s possible for the New Majority. I’m glad that Nate the Nerd Farmer will be cultivating students–and more teachers like him–for many years to come.

This blog post was originally published on Gates Notes, the blog of Bill Gates.

BE Smart is a grantee of the Bill & Melinda Gates Foundation.