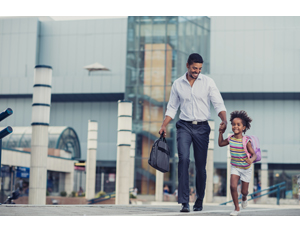 I like the concept of Take Our Daughters and Sons to Work Day; the idea of exposing kids to the work world simply makes sense. When I was five, I was so curious about what my parents did all day. I asked my mother, and she told me she made money. For years, I imagined her literally crafting dollar bills and shaping metal coins.

But today’s five-year-olds can be taken to work and see what theirÂ parents do first-hand. The problem? It’s mostly high-income, professional parents taking their kids to work. Lower income kids, who could benefit from this exposure, are left out.

Citing an article originally published via Quartz, TheÂ Brookings Institute shares a compelling case that puts a twist on the observation of Take Our Daughters and Sons to Work Day: Take someone else’s kid with you to work–a child from a lower socioeconomic status than yours.

Here’s an excerpt from the article that originally appeared on Quartz, but I found on brookings.edu:

This week, parents are being urged to take their kids to work for the day. But here’s a better idea: Don’t. Strike a blow for equality by taking a kid from a different social background instead.

Take Our Daughters and Sons to Work Day is intended to get children thinking about their future careers, but by having parents take their own kids to work, we perpetuate class divides. If your mother is a lawyer, you spend the day in a law firm. If your dad stocks shelves in a grocery store, then–if he is even allowed to bring you along–that’s what you will see. If your parents are unemployed, you don’t have a chance to go anywhere at all. And so the wheel turns.

When the event was founded back in 1993 as Take Your Daughter to Work Day, the idea was to promote gender equality. It expanded to include sons 10 years later, and has since lost much of its animating purpose. It also remains a largely white-collar exercise: Sponsors of the foundation that advocate the holiday include MetLife, HP, AOL, and Goldman Sachs.

The Take Our Daughters and Sons to Work Foundation tries hard to suggest an equitable goal, encouraging organizations to include “children from housing authorities and shelters, nieces and nephews, neighbors and friends, granddaughters and grandsons, and more.â€

President Barack Obama tried valiantly to shift the day’s focus: In 2015, he urged employers to think bigger. “Reach out to young people in your community who don’t have a workplace to visit,â€ he urged. “Invite them to spend the day with you. Show them what you do every day, and tell them that, with hard work and determination, they can do it too.â€

Read more at Quartz or Brookings.