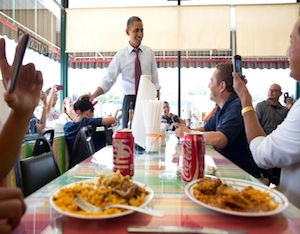 The 44th President of the United States is widely the most parodied politician the world has ever seen. So, there’s no doubt that credit companies would be leery when seeing the name Barack Obama pop up in their databases.

An executive order which the president signed last Friday calls for chip-and-pin technology on all federal government credit and debit cards. Such a situation placed the American Commander-in-Chief in a troubling situation as Obama admitted that his card was declined at a restaurant in New York City last month.

“It turned out I guess I don’t use it enough, so they thought there was s one fraud going on,” Obama said, adding that, thankfully, First Lady Michelle Obama picked up the check. “I was trying to explain to the waitress, ‘No really, I think that I’ve, uh, been paying my bills.’ So even I’m affected by this.”

While there is no information pertaining to the location of the restaurant where the president’s credit card was declined, it was previous noted that the Obamas dined at Estela last month. President Obama’s executive order was meant to better protect Americans from financial fraud and identity theft, which is the country’s fastest growing crime.

The order requires that federal law enforcement send compromised credentials to a nationwide “Internet Fraud Alert System” and requires that government agencies that make personal data available online use two-factor authentication. The order also calls for government agencies to begin introducing machines that read a new type of credit card that uses an embedded microchip and a PIN code to authorize transactions. These “chip-and-pin” cards have been created to make it much more difficult for hackers to make counterfeit credit cards from stolen data information.

The plan is to widely introduce these chip-and-pin cards nationwide to credit card companies by October of next year.