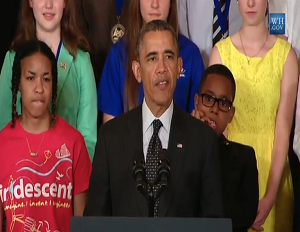 President Obama tapped into his inner nerd self on Tuesday, May 27 as he welcomed more than 100 students from 30-plus states to the White House to showcase the talent of the next generation of America’s scientists, engineers, and inventors.

With a special focus on helping more boys and girls excel in the field of STEM, President Obama announced new steps in his Educate to Innovate campaign that includes a national STEM mentoring program in seven cities, a new $35 million Department of Education competition, and an expansion of STEM AmeriCorps.

After interacting with the students and testing out some of the inventions, including a concussion helmet and a robot designed to help with icy water search and rescue, President Obama addressed the room and elaborated on the importance of recognizing the work of students in the field of STEM.

“As a society, we have to celebrate outstanding work by young people in science as much as we do Superbowl winners,” Obama said after speaking on the tradition of sports teams being recognized by the White House.

On May 27, President Obama also announced that his campaign’s partnership with Time Warner Cable (TWC) has reached a milestone of connecting one million young people to the fields of math and science through its five-year, $100 million initiative Connect a Million Minds (CAMM). TWC was also honored to have two of its participants, 12-year-old Jayda Collazo of Bronx, New York, and 11-year-old Eddie Cuba of Peterson, New Jersey participate in the White House Science Fair.