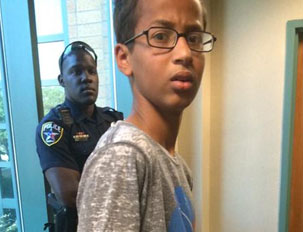 The viral image of 14-year-old 9th grader, Ahmed Mohamed, in the midst of his arrest. This photo was made public by one of Mohamed's family members.

Cool clock, Ahmed. Want to bring it to the White House? We should inspire more kids like you to like science. It’s what makes America great.

The 14-year-old 9th grader in Irving, Texas, was arrested yesterday for bringing a homemade clock to school. One of his teachers mistook it for a bomb and called the authorities. He was handcuffed and arrested and walked off the premises. Ahmed is brown-skinned and Muslim. #IStandWithAhmed is trending heavily on Twitter today and Ahmed has received national support, including this from presidential hopeful Hillary Clinton:

Lathan, Ealy and Chestnut Star in The Perfect Guy

[REPORT] Students Who Use Tech in School Don’t Fare Better

FacebookTwitterYoutube
← Lathan, Ealy and Chestnut Star in The Perfect Guy ← [REPORT] Students Who Use Tech in School Don’t Fare Better
×
'