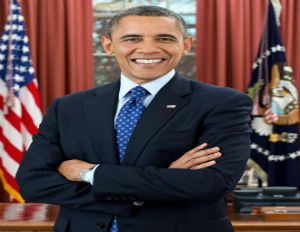 The White House has released President Obama’s official portrait for his second term.

The image was captured by official White House photographer Pete Souza.Â In the new portrait, Obama sits in the Oval Office, smiling with his arms folded.Â It will replace his portrait from 2009 which hangs in all federal buildings.

President Obama’s 2009 portrait showed a straightfaced Obama in front of a grey background and the American flag.