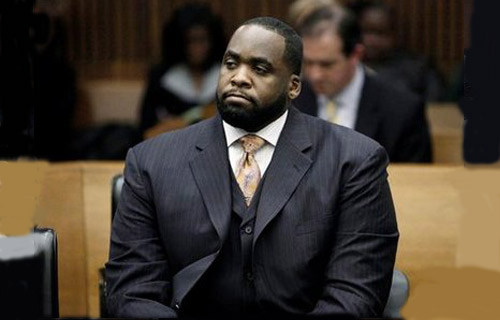 Back in 2013, former Detroit Mayor Kwame Kilpatrick was found guilty of multiple counts of racketeering and extortion in a federal court. A jury took 15 days to decide that Kilpatrick and his friend, contractor Bobby Ferguson, were guilty of governmental malfeasance.

He was convicted of 24 charges, including extortion, mail fraud, and tax violations.

Last February, Kilpatrick requested a commutation of his prison term from the White House after losing all filed appeals. He has maintained that he was wrongfully convicted and railroaded by overzealous prosecutors.

“Mr. President, I am humbly and respectfully asking that you will extend your heart to me and my family, for another chance at abundant life. I am humbly requesting that you would give me relief from this egregious and unjust federal prison sentence of 28 years. With ONE STROKE OF YOUR PEN, you would give new life, freedom and hope to me, my family, and many who will be served by your gesture of kindness, mercy, and forgiveness. (Clemency Case Number: C199974…KILPATRICK)”.

Then in May, despite initial reports that Kilpatrick would most likely be freed from jail, it turns out that was not the case.

“On Tuesday, May 26, 2020, the Federal Bureau of Prisons reviewed and denied inmate Kwame Kilpatrick for home confinement,” the Bureau of Prisons office of public affairs wrote in an email to The Detroit News at that time.

And now, according to The Detroit Free Press, Trump commuted Kilpatrick’s sentence just before his presidency ended.

The White House released a statement pertaining to Kilpatrick’s commutation:

“Mr. Kilpatrick has served approximately 7 years in prison for his role in a racketeering and bribery scheme while he held public office. During his incarceration, Mr. Kilpatrick has taught public speaking classes and has led Bible Study groups with his fellow inmates.”