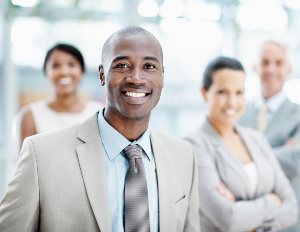 In his inaugural address, President Trump said, “We, the citizens of America, are now joined in a great national effort to rebuild our country and to restore its promise for all of our people.â€

The impact of entrepreneurship, driven by small businesses that grow and hire, means more jobs, social mobility, and investment in the communities that need it most. Supporting minority-owned and operated businesses may be President Trump’s best bet to successfully engage communities of color.

Since then, headlines have been punctuated by the struggle of many in communities of color to grapple with the fact that a campaign filled with often-offensive overtures won, and that despite this their communities cannot afford to take a step back.

Throughout his campaign, President Trump consistently confronted communities of color with a stark and often dire picture of their economic and social reality. He also promised that he was uniquely qualified to make things better. His speeches in Detroit, Charlotte, NC, and elsewhere highlighted the tragedy in the journeys of many communities in AmericaÂ but left out the triumph. Yes, African American, Latinx, Native, and other households trail majority households in many economic measures; this must be addressed. However, there are positive and inspirational stories that can assist in this work.

Notably, the constriction of global capital markets during the Great Recession exacerbated the perennial problem for entrepreneurs; accessing the capital needed to start or grow a business. Despite this, according to the latest statsÂ from theÂ Minority Business Development AgencyÂ (MBDA), entrepreneurship is on the rise in communities of color.

Black women are most the entrepreneurial segment of the U.S. population.Â An American Express OpenÂ report found that the number of businesses owned by African American women has grown 322% since 1997.

The spark of innovation and the grit necessary to launch and grow a business exist in every culture and community in our nation. The Great Recession created a crucible of high unemployment, low labor force participation, and the need to provide for family. This crucible has forged a breed of entrepreneurs–perhaps–more interested in putting food on the table than setting foot in Silicon Valley. These entrepreneurs are as valuable to our economy as those stars raising venture capital.

Economic dynamism, the dynamic movement of the economy as new businesses enter and older businesses close is necessary for a healthy economy. Otherwise, resources are held in older, larger businesses, decreasing the flow of capital and increasing inequality. Every new business makes the economy more dynamic. Every business counts.

This fact highlights the opportunity in President Trump engaging minority-owned businesses early and often. President Trump can do this by fulfilling campaign promises, supporting ongoing efforts, and recognizing the intersectionality of this work.

During his campaign, President Trump said he would move our economy forward. The economy added 156,000 jobs to bring the unemployment rate to 4.7 percent as of the last monthly jobs report from the Bureau of Labor and Statistics (BLS). By comparison, in President Obama’s first monthly jobs report BLS noted that the economy lost 598,000 jobs and the national unemployment rate was 7.6 percent.

If President Trump can build on the progress made by President Obama and sustain or increase growth–that alone will create an environment for entrepreneurs to thrive. President Trump’s promise to lower small business taxes from 35% to 15% has the potential to make sustaining and growing a small business easier. Since many small businesses act as pass-through entities and do not fully retain profits, he will need to clarify the requirement that entrepreneurs “retain profits within the businessâ€ to achieve the macro effect here.

Lastly, if President Trump secures his promised $1T infrastructure stimulus, the opportunity to engage minority-owned businesses and distinguish himself from President Obama will be massive.

In 2009, President Obama signed the American Recovery and Reinvestment Act (ARRA) into law. The legislation was designed to stimulate the economic recovery from the Great Recession. While language was included to support minority-owned businesses, Latinx, Asian, African American, and other minority-owned businesses won proportionally fewer ARRA government contracts. As reported by the Congressional Black Caucus Foundation, African Americans owned 7.1 percent of businesses in the country at the timeÂ but received only 3.5 percent of recovery act contracts available. Latinx entrepreneurs owned 8.3 percent of all U.S. businessesÂ but received only 5.1 percent of the contracts. Asian American entrepreneurs owned 5.7 percent of businessesÂ and received 3.3 percent of ARRA contracts.

President Obama has a consistent record on supporting diversity. However, if President Trump, through careful structure, targeted outreach, and consistent engagement can get a proportional amount of contracts, contract value, and/or loans to minority-owned firms, he can distinguish himself from his predecessor and push needed investment into the communities he vowed to revitalize.

This type of business practice should be implemented first in the U.S. Senate where diversity lags far behind norms in other government agencies and the private sector. If applied to hiring for political appointees and the procurement process for the Trump Infrastructure Stimulus, this practice could lead to consistent support for diverse entrepreneurs.

Finally, supporting diverse entrepreneurs is not done in a vacuum. During a speech at an African American church in Detroit, then presidential candidate Trump said, “I believe that we need a civil rights agenda for our time.â€ Many in communities of color are wondering how President Trump and his Cabinet nominees will ensure that progress is made on civil rights and social justice. Supporting entrepreneurs of color directly intersects with this question. Support for diverse entrepreneurs cannot be traded for work to protect the civil rights of all American citizens. However, protecting the rights of entrepreneurs, eliminating barriers to contracts and capital, and ensuring vendors and staff represent the diversity of our nation may create a way forward on these issues and an opportunity for more work with communities of color in the future.

Entrepreneurship and the macroeconomic effects of small business growth have the potential to transform communities and our nation for the better. This is an opportunity that President Trump and our nation cannot afford to miss.

Brandon Andrews is a senior consultant at Values Partnerships. View his commentary on business and politics at www.brandonandrews.me