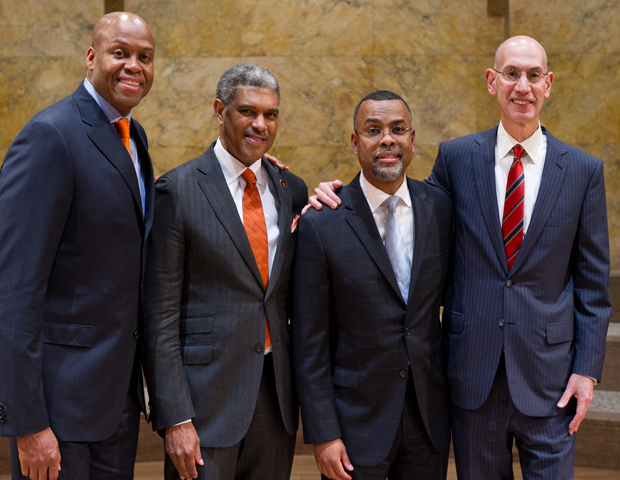 Can basketball serve as a conduit of change for and make an impact onÂ issues of racial justiceÂ in today’s society?

The tone was setÂ with theÂ insightful introduction by Mollie Marcoux, the Ford Family DirectorÂ ofÂ Athletics, that spoke to why Princeton was the perfect platform for the topics of theÂ day with the featured panelists. After congratulating the women’s team,Â where Robinson’s daughter playsÂ a Freshman,Â on having a perfect regular season, and describing even greater academic success their student-athletes have outside of their sport, she stated, “we wantÂ our athletes and coaches to lead on important issues and to use our platform to bring the community together and make the world a better place.” The conversation that followedÂ delivered on this mission.

The moderator, Center for African American Studies Chair Eddie S. Glaude Jr., opened theÂ discussion with a descriptionÂ of the times, stating that we are in a moment of intense crisis and asking about the responsibility of athletes and executives. Silver commenced the responses. Though it has been a year since hisÂ swiftÂ action, including a lifetime ban and $2.5 million fine, in dealing with former LA Clippers owner Donald Sterling,Â that was just the beginning ofÂ an influx ofÂ national headlines reporting issues and injustice towards people of color in this country. (View the full panel here.)

When 80% of the players share the sameÂ ethnicity of those featured in these stories, he is not surprised that players like Derrick Rose would want to don T-shirts that read “I Can’t Breathe,” but he believe that there needs to be a balance.

“There is a myth that there is one unified player,” Silver said, adding that they each has their own opinions.”I also have a responsibility to draw a line because if that platform [NBAÂ games]Â became the daily forum for political expression, it would drown out any particularÂ political point of view and at then end of the day it would be a disservice to the fans who came to see a basketball game,” Silver explained.

Steve Mills weighed in, saying, “I don’t think players have a responsibility to do this. I think they haveÂ an opportunity… if they feel strong enough where they feel like this issue meansÂ enoughÂ to [them] then there’s an opportunity to use the platform … to take a position on something.”

In reference to collegiate athletes, Craig Robinson, who was a coach at Brown University and Oregon State, shared that he had a responsibility to at least try to educate his players in a way they feel comfortable and safe sharing an opinion if they wanted to do so.

Panelists also discussed their views on process after conversations. Robinson shared that he believes the importance of education should be emphasized to athletes so that they can be professionals on and off the court for a lifetime. Mills said players have an opportunity to help young people carry themselves in a positive manner and understand that there isÂ a path out of their situation that does not include illegal activity.

Lastly, Silver reflected on how the NBA wants to make an impact by helping young boys and girls interested in their sport to become productiveÂ andÂ politically active citizens through teaching them principles of the game includingÂ respect, integrity, hard work and team work. Silver said, “It’s amazing the impact we can have on society through a team sport like basketball.”

Mia Hall is a multimedia content producer and speaker specializing in the business of sports. She has worked with organizations such as the WNBA, NY Knicks, The High School of Sports Management and Barclays Center. She is passionate about the youth of today and committed to organizations such as PowerPlay NYC, Inc. and other youth empowering organizations. Mia is a graduate of Hampton University and Harvard University. A native of Brooklyn, N.Y., she covers events in NYC and beyond.