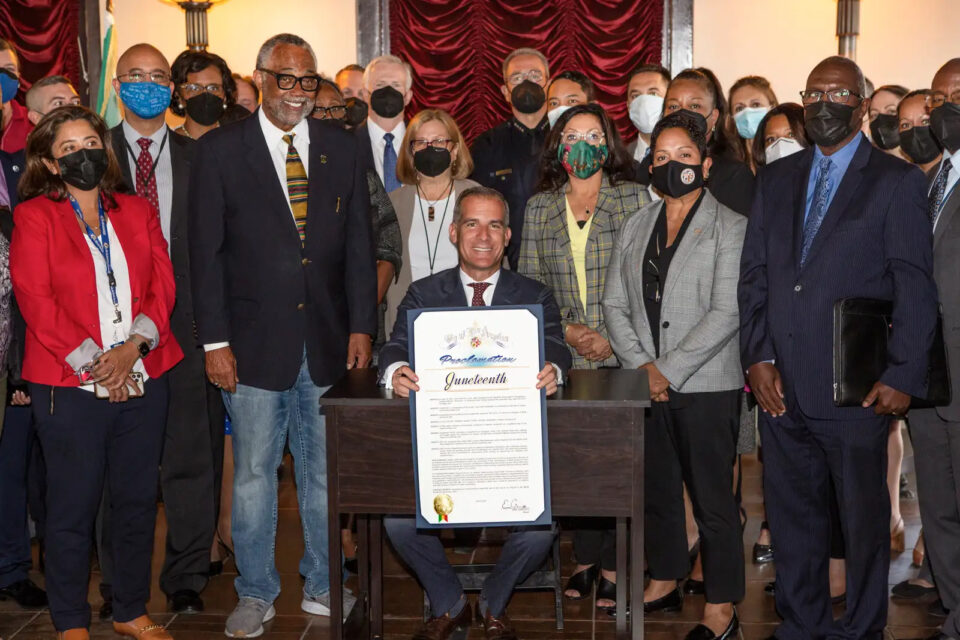 “We need every Angeleno to learn the full story of our past, no matter the ugliness of some of its chapters, and that means recognizing the lasting legacy of slavery in our country,” Garcetti said during the signing ceremony at City Hall.

From its Galveston, Texas, origins in 1865, Juneteenth marks the day that the Union soldiers delivered the news that the war had ended and that the enslaved Black people were free. This occurred two months after the Confederates surrendered. The news of freedom also came two and a half years after President Lincoln’s Emancipation Proclamation.

“While we can’t dislodge structural racism overnight, it’s our responsibility as a city to acknowledge hard truths and advance reforms, and by declaring Juneteenth an official holiday, we’re making it clear that the ending of slavery should be remembered as a watershed moment in American history,” Garcetti said, per the mayor’s website.

In August 2020, the Los Angeles City Council voted unanimously to advance the process of making Juneteenth an official city holiday, according to Fox 11 LA. The proposal was introduced by Councilmen Curren Price, Herb Wesson, and Marqueece Harris-Dawson in response to the nationwide demonstrations demanding racial equality and justice for the killings of Black Americans at the hands of police brutality.

“Juneteenth addresses the end of the nation’s darkest days by acknowledging the historical significance, and it offers a glimpse, a small glimpse, of vindication,” Price said. “This will now be a day of remembrance for our city. At this time in our culture, we need to do everything in our power to … educate one another about the things left out of the history books, and we have to demonstrate inclusion and celebrate our progress, keeping in mind that we still have a long way to go.”