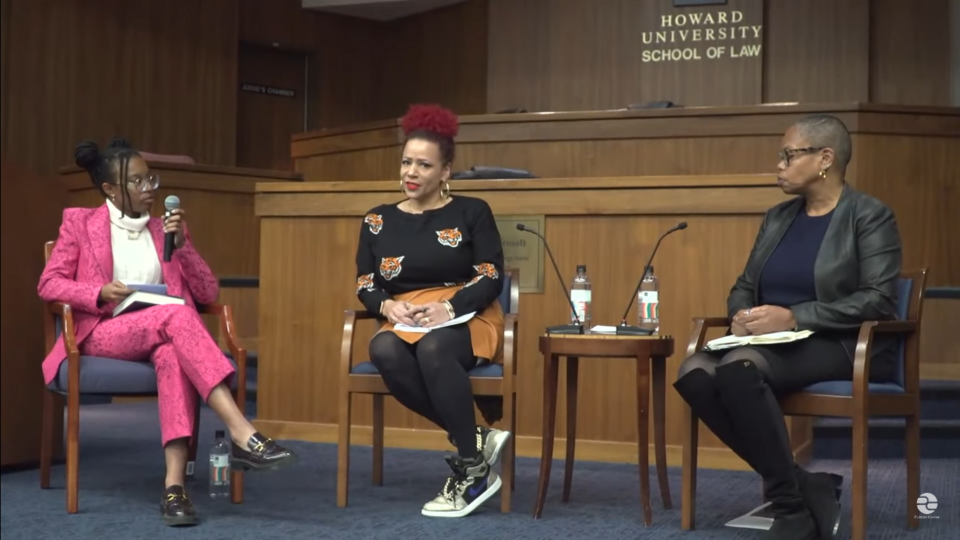 The two Black female professors discussed the current state of American politics and civil rights through the lens of The 1619 Project, which reframes American history through slavery. The year 1619 marks when enslaved Africans first arrived on America’s shores, beginning centuries of slavery that still impact American society and politics.

“If you don’t understand that history, then you can’t understand where we’re at right now, and you certainly can’t fight it,” Hannah-Jones said during the discussion.

The 1619 Project was released in August 2019; the New York Times Magazine featured a series of articles by Hannah-Jones and several other authors. The professors discussed America’s founders, their view of Democracy, how it has evolved since 1776, and what it would take to make America a true Democracy.

“That’s a big question because, on the one hand, I do think we were founded as a White supremacist nation and that’s what The 1619 Project argues,” Hannah-Jones said.

“Slavery is one of the oldest institutions in what we call the United States, it is foundational in our legal, political, cultural, and social systems and these anti-democratic tendencies are also embedded in our society,” she added. “So to have democracy, one voting has to be easy; voting has to be fair. So gerrymandering is anti-Democratic, the electoral college is anti-Democratic, all of these ways to try to ensure that the will of the people cannot actually be realized are all anti-democratic, so we’d need massive reforms of just basic things like voting.”

The 1619 Project has been praised by many, including former President Barack Obama, who congratulated Hannah-Jones and Howard University on the opening of its new Center For Journalism and Democracy, which focuses on training and supporting aspiring journalists in investigative skills and historical and analytic expertise to cover crises faced by our democracy.

Major thank you to @BarackObama for supporting the Center even though he couldn’t be with us in person today. #CJDDemocracySummit pic.twitter.com/sg1cNShWP1

“I want to thank Nikole and everyone who has worked so hard to make it a reality. The center will help students to learn investigative reporting skills and give them more opportunities to put those skills into practice. But what really sets the center apart, and this is not surprising given Nikole’s background, is a focus on historically informed journalism in service of democracy and equity,” Obama said. “As a society, we need journalists who will report not just what’s happening but why it’s happening and who’s being affected. Journalists who can connect the dots and tell a more complete version of our American story. That’s what the Center for Journalism & Democracy will train young journalists to do.”

Hannah-Jones, who founded the Center for Journalism and Democracy, will also serve as the inaugural Knight Chair in Race and Journalism at the Cathy Hughes School of Communications at Howard University. Crooms-Robinson meanwhile, teaches constitutional law, gender and the law, international human rights law, and Supreme Court jurisprudence.