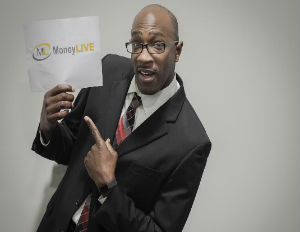 Studies show that 84 percent of undergraduate college students have at least one credit card under their belt, while 39 percent of students have a credit card before entering college. Although credit cards can be helpful in establishing credit if used wisely, many students enter the real world without an ounce of knowledge as it relates to managing their finances.

To help ensure that young people are informed about financial literacy, Lonnie Mathews, who is the director of Alliance Financial Ministries in Houston, established a one-day event called Money Live where hundreds of local high school students gather for a career and money simulation.

[Related: How to Have the Money Talk With Your Beau]

After speaking to a group of young people at his church about finances only to realize many of them had little to no prior knowledge about the subject, Mathews knew that it was up to him to establish change. Created in 2012 after receiving a Dow Promise grant from The Dow Chemical Company Foundation, Money Live is described as an MTV meets financial literacy program where students arrive to the event with a DJ playing music before they are talked to about careers and money.

“They go through a real live money simulation where we pass out their new lifestyle and careers,” Mathews tells BlackEnterprise.com. “Say you’re 25 and you and your spouse bring home 4500 a month. You have a 5 year old and you’re in debt.”

Mathews says the students then take the financial situation they are given and go around the room to the various stations. Each station is a vendor where the students can buy a house, pay for daycare, pay for groceries, etc. and it is up to them to make their own financial choices that they see most fitting for their lifestyle.

“It’s a great experience for the kids because they’re like, ‘This isn’t real,’ and I’m like ‘Yes this is,'” says Mathews.

Despite the program still being fairly new, Mathews says its reach has grown tremendously as they’ve went from 70 students its first year to roughly 500 students expected to attend this year. In an effort to build up the momentum and excitement around the event, Money Live is holding an essay contest where students explain what financial literacy means to them for a chance to win a prize at this year’s event held on Saturday, June 20.

To learn more about the financial literacy simulation, visit their website at MoneyLive.org.