Quality Education Around the World 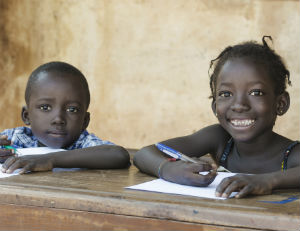 Moderated by Chernor Bah, an international development expert with the Population Council, the panel participants were Alice Albright, CEO of Global Partnership for Education; Elias N. Bou Saab, minister of Education and Higher Education in Lebanon; and Gus Schmedlen, vice president of Worldwide Education at HP.

Children Around the World

Here at Black Enterprise, we focus on the U.S. education system, particularly its inequities and solutions that close equity gaps. Globally, however, education doesn’t always paint a pretty picture either.

Bah noted that 250 million children around the world are illiterateÂ and that disinvestment in education in many countries is chronic. He said that countries like Vietnam and SouthÂ Korea have invested in education as a top priority, but there are still 1 billion children globally that don’t have access to an education that will prepare them to be self-sufficient adults.

Complicating this picture is the critical issue of refugees, 40 million of which are children. Lebanon, a small country bordered by Syria and the Mediterranean Sea, is host to 1.5 million Syrian refugees, the children of whom sometimes overwhelm the Lebanese schools’ ability to meet their needs. Yet, Bou Saab, the Lebanese minister of education and higher education, says his country is adjusting.

In spite of the problems, there was clear agreement that an uneducated populace is never good for any country, and also that the 3%—4% of international aid that goes to education yields much more than a 3%—4% dividend.

Sometimes barriers to education that seem insurmountable can be breached. Bah related a story about a young woman whose family fell apart during the Ebola crisis. She ended up getting pregnant and wasn’t allowed back in her school.

But Albright spoke of mother’s committees in certain communities that are helping to break down the stigma of unwed parenting and forge a path back into school for these girls.

Also acknowledged was the need for socialization and psychological help for children and young people who’ve been out of school for three to four years. Their re-entry into school requires that kind of support for them to succeed.

The session ended with each table of attendees discussing solutions to education issues in various regions of the world.

The Clinton Global Initiative will continue overseeing its outstanding commitments to action. For more information, visit its website.