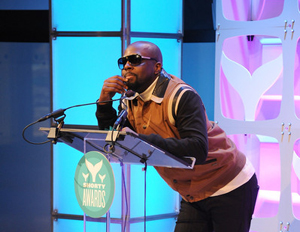 On April 20 at the Times Center in New York City, the 7th Annual Shorty Awards honored the best of the best of social media, with this year’s host, actress and comedian Rachel Dratch, kicking off the evening with a hilarious video highlighting her training regimen to prepare for hosting duties.

[WATCH Below: Wyclef Jean a Presenter at the 2015 Shorty Awards]

Check out a full list of winners here, and social media insights from attendees below:

I had an amazing time at the Shorty Awards. Thank you for, Best Parent. @ShortyAwards #shortyawards @kevinjonas pic.twitter.com/AxyJj2WNXz

Teal will have to do #shortyawards pic.twitter.com/BcOmVvVkDN

We are so happy to have worked with @ShortyAwards and book some awesome celebrities for the show! The show was a blast and #SNL legend @theRealDratch did an excellent job as the Master of Ceremonies!! We also had appearances by @HannibalBurress, @IAmABFAlecBaldwin, @KevinJonas, @BellaThorne, @Wyclef, @TheScienceGuy, @TylerOakley, @CaseyNeistat…and more! @PanicAtTheDisco performed and premiered their new song #Hallelujah! You can view the show at www.shortyawards.com!

I had a couple things to say… My mom and sister thought it was hilarious!! So did the audience!! #ShortyAwards #MamaKilledIt #UnitOfTheYear #ParentOfTheYear Congratulations to my mom once again!!! What an honor @maralascott #OprahsAmbassadorOfHope

Me & Dratch at #ShortyAwards