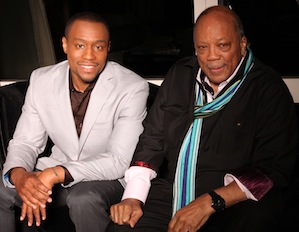 This week on a special edition of Our World with Black Enterprise, host Marc Lamont Hill visits with legendary musician, arranger, composer and 27-time Grammy Award winner Quincy Jones, just in time for Black Music Month. The man also known as simply, “Q”, candidly discusses his work with such music icons as Frank Sinatra, Ray Charles and Michael Jackson, as well as the future of the recording industry.

As a conductor, record producer, musical arranger, film composer, television producer, and trumpeter, Quincy Delightt Jones Jr. has a career that spans five decades in the entertainment industry and a record 79 Grammy Award nominations, 27 Grammys, including a Grammy Legend Award in 1991. Jones, 78, is particularly recognized as the producer of the album Thriller, by pop icon Michael Jackson, which has sold more than 110 million copies worldwide, and as the producer and conductor of the charity song “We Are the World.â€ In 1968, Jones and his songwriting partner Bob Russell became the first African Americans to be nominated for an Academy Award for Best Original Song The Eyes of Love from the Universal Pictures film Banning. That same year, he became the first African American to be nominated twice within the same year when he was nominated for Best Original Score for his work on the music of the 1967 film In Cold Blood. In 1971, Jones would receive the honor of becoming the first African American to be named musical director/conductor of the Academy Awards ceremony.

Married three times and the father of seven children, Jones, born in Chicago, shares his larger-than-life journey in his 2001 book Q: The Biography of Quincy Jones (Doubleday).