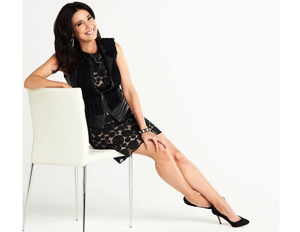 QVC caught quite a bit of backlash when a host on the popular shopping network took what many perceived to be subliminal jabs at a model’s natural hair. In the segment, two hosts glamorize a Dooney & Burke handbag being modeled by a woman rocking her natural curls in a loose Afro. One of the hosts says, “You might look back and think, ‘Why’d I wear my hair like that?’ but you’ll still like your purse.” After a few shared chuckles, the co-host says, “That’s right. You won’t look at your hair in the picture; you’ll look at your handbag.”

Bougie Black Girl’s L.A. Moore didn’t find the comments laugh-worthy and called the network’s hosts out on it. One of the hosts, Sandra Bennett, responded and took to Facebook to publicly apologize. The apology reads:

“Hi everyone. I want to apologize to anyone I offended during a recent Dooney & Bourke show. I made a comment along of the lines of when you carry a Dooney, you look good even if you don’t do your hair. It was meant to be lighthearted, but in the middle of my comment, the camera cut to Michelle, an African American model. I want to be clear that I was in no way talking about her. It was just terrible timing. In fact, despite how it may have appeared, I didn’t even realize this had happened until today when I saw some comments on Facebook and received a phone call. I have since called Michelle to apologize and thankfully, she didn’t remember the comment or even know any of this had happened. I’m confident that anyone who knows me personally understands I would never even think to make such a connection. Still, in our business perception is reality and I’m mortified that I gave that impression. So again, I’m very sorry to our viewers who felt hurt or angered by my comments.”

Many have forgiven Bennett, including L.A. Moore, and accepted her apology. In a Twitter exchange between Bennet and Moore that has since been deleted, @BougieBlackGirl tweeted, “@SandraQVC Thanks for reaching out. Many of our readers are QVC customers and were offended by the video. I am glad you spoken [sic] to the model.” Before itsÂ deletion, the blogger screenshot the exchange and it can be seen in entirety here.

You can see the original QVC segment below.