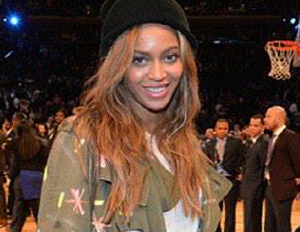 Beyonce has been known to set more than a style trend or two, being a multiplatinum-selling queen of empowerment for fans worldwide and a bankable brand with influence and clout for the masses.

But what happens when star-studded style meets racial undertones? The fashion industry has been under scrutiny for decades about its lack of diversity on the catwalk and in magazine pages, as well as racial controversy related to consumers and employees.

Beyonce’s latest All-Star weekend fashion pick joins that touchy discussion, with some style watchers giving a Scooter LaForge trench coat she wore during the festivities more than a side eye. The coat, which retails for $320, features a custom-painted depiction of a smiling clown that some are describing as the often controversial, black-face character Sambo.

Beyonce…should not have been wearing a sambo trench coat…she rarely makes missteps like this. dont let it happen again

Guess #Beyonce can do no wrong. Even promoting a Sambo trench coat at the #AllStarGame mid-#BHM #KNOWyourHISTORY #GM pic.twitter.com/iV8fnMknIi

On FashionBombDaily.com, a leading site that features African American trendsetters, industry leaders and innovators, reactions ranged from calling the coat “ugly and inappropriate” to referring to it as “racist crap.”

LaForge, an artist from New Mexico, tweeted the star thanking her for wearing his creation:

This isn’t the first time fashion has been at the center of racial controversy. Early last year, German art and fashion magazine Garage faced backlash after publishing a photo of its white editor in chief sitting on a black woman’s body as a chair. High-end retailer Barneys faced lawsuits after accusations of racial profiling of black shoppers, and were made to shell out more than $500,000 in damages. Vogue magazine was among luxe magazines featuring models in black face in 2013. Designer Peggy Noland faced staunch criticism for a dress she designed featuring a topless Oprah Winfrey. All of these moments have led many to question how much is too much when it comes to the relationship between race, discrimination, art and fashion. Is it all fashion faux pas or laissez faire haute couture? Is it even that serious?

What are your thoughts? Are racial undertones ever OK for the sake of fashion or art? Follow @BlackEnterprise and #Soundoff with your opinion, or leave a comment below.