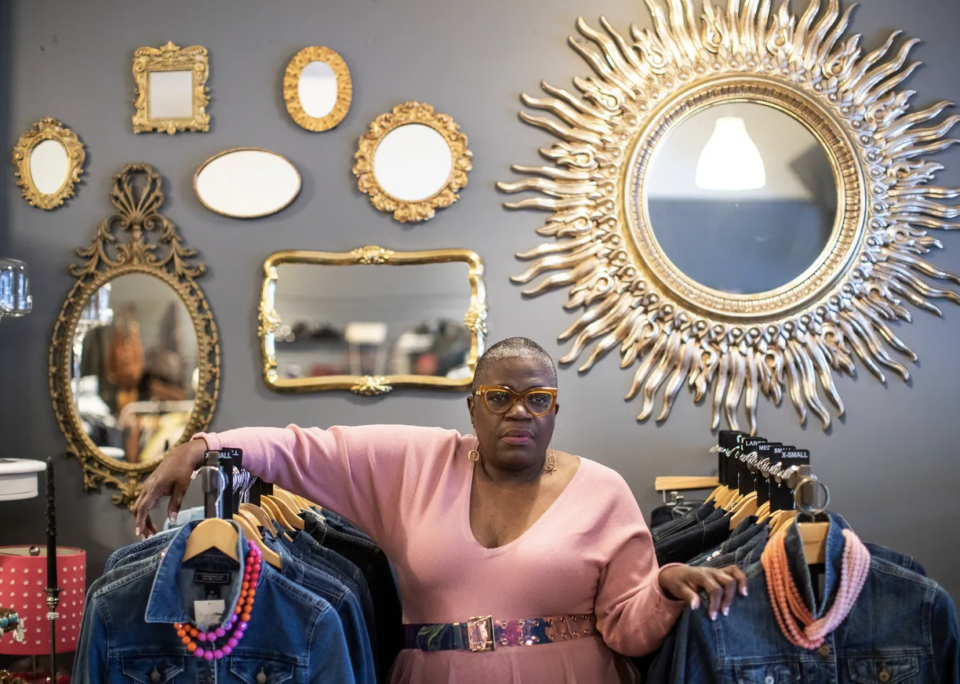 A not-so-friendly neighbor placed a racist Ku Klux Klan (KKK) flag in the window, and it faces a Black neighbor’s home in Michigan.

According to The Detroit Free Press, Je Donna Dinges’ ex-husband noticed the bigoted paraphernalia hanging from the Grosse Pointe Park house when he took out her trash on Feb.15.

The 57-year-old woman has lived in the home for over ten years, and a local news outlet asked about her reaction when she saw the flag.

“I was furious. How dare he feel comfortable putting a symbol of hatred, violence and domestic terrorism at his window facing my house,” said Dinges told The Detroit Free Press.

FOX 2 also reported that this isn’t the first time that the racist neighbor has been a menace to the boutique owner.

A few weeks before the flag debacle, Dinges disclosed that someone left a full gas can in her trash bin. The incident prompted the woman to install security cameras that faced the neighbor’s house.

According to the Detroit Free Press, Dinges notified state and federal law enforcement agencies for help regarding the KKK flag, but they didn’t provide any assistance. It wasn’t until Dinges’ friend reached out to WDIV Local News 4– that the police addressed the issue.

“In less than an hour,” after WDIV reporter Mara MacDonald contacted city officials, the police went to the neighbor’s house.

“Detectives, who came out from the Grosse Pointe Park Police Department, told me that the reason the neighbors put the klan sign up was because I put a camera on my windowsill to record what was happening along the side of my house to protect myself,” Dinges told FOX 2.

When detectives questioned the neighbor’s girlfriend about why they didn’t talk to Dinges about the camera, the two claimed they were “non-confrontational people.”

But placing an offensive and racist icon in a window isn’t aggressive?

The Detroit Free Press reported that the culprits finally took down the flag.

Via Facebook, Grosse Pointe Park officials wrote a statement regarding the incident on Feb.17.

“At approximately 3:00 pm Tuesday, February 16th, the Grosse Pointe Park Department of Public Safety was made aware of a Ku Klux Klan flag displayed in a window that faces the home of an African-American woman. Officers were promptly sent to the home to investigate and address the situation. The officers made contact with a resident of the home displaying the flag, and the resident agreed to remove the flag from the window due to its offensive nature.”

“The Grosse Pointe Park Public Safety Department serves all residents of our community no matter their race, color, creed, sexual orientation, gender identity, disability or religion. We are committed to ensuring the safety and security of all residents of this community, and we take every matter brought before our department seriously. Intolerance, hate, and ignorance have no home in the Park,” the statement continued.

“Threats, either real or perceived– will not be tolerated. The Department is reviewing the facts and its records to ensure its officers have consistently acted appropriately and in accordance with policy. If any legal action is allowed or warranted under the law, the City will take such action.”

“The Mayor, City Council, Public Safety Department and City Manager have been in touch with the resident who reported the flag to offer our support and help. We are committed to ensuring that residents feel safe and that all people are welcome and respected in our community.”

Posted by City of Grosse Pointe Park on Wednesday, February 17, 2021

Senator Adam Hollier, who represents the area, said that there should be more protections against acts such as this.

“After an arson threat, a Black resident of Grosse Pointe Park got a security camera for the side of her house. In response, her neighbors hung a KKK flag in their window aimed at her. We need stronger laws to protect people from such acts of intimidation,” he said.

After an arson threat, a Black resident of Grosse Pointe Park got a security camera for the side of her house. In response, her neighbors hung a KKK flag in their window aimed at her. We need stronger laws to protect people from such acts of intimidation. https://t.co/aDuUZCg8rU pic.twitter.com/WF2wYEDKGZ

According to the Detroit Free Press, a report about the incident was sent to the Wayne County Prosecutor’s Office.

Grosse Pointe Park is an affluent suburb of Detroit’s east side with a little over 11,000 residents. The city is 85% white, according to Niche.