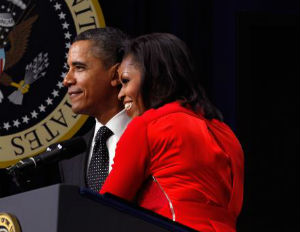 A series of racist tweets sent out by an adviser to Puerto Rico’s most powerful female lawmaker have drawn controversy, according to the Associated Press.

The tweets, sent by Heidi Wys, have urged many legislators to call for her resignation.

“Who cares?â€ Wys wrote in response on Twitter. “Take her to Burger King, buy her a sundae with double banana, take her to your homeland, Kenya!â€

Wys is the main adviser to House of Representatives President Jenniffer Gonzalez.

“How is it that Puerto Rico ‘does it better’ if the government pays an employee who is discriminating against the president of the United States?â€ said Sen. Juan Eugenio Hernandez, alluding to Puerto Rico’s tourism slogan.

“It is a racist comment from a person who must have great hatred within,â€ he said. “This is placing the name of Puerto Ricans across the world in a very precarious situation.â€

Wys claims she is not racist and her favorites nieces are black.

Read the rest here at the Associated Press