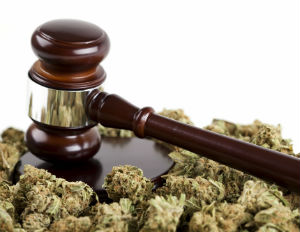 Despite equal usage rates, blacks are 3.73 times more likely than whites to be arrested for possession of marijuana.

“While the criminal justice system casts a wide net over marijuana usage and possession by blacks, it has turned a comparatively blind eye to the same conduct occurring at the same rate in many white communities,â€ according to a report by the American Civil Liberties Union. “Just as with the larger drug war, the War on Marijuana has, quite simply, served as a vehicle for police to target communities of color.â€

President Nixon initiated the War on Drugs to supposedly mitigate the drug trade and subsequent violent crimes that ravaged poor communities of color. “The only beneficiaries of this war are organized crime member and drug dealers,â€ Nixon expressed.

As a result, African Americans are 62% of drug offenders sent to state prisons, yet they only represent 12% of the U.S. population. Black men are also sent to federal prison on drug charges at a rate of 57 times greater than white men, according to the Human Rights Watch.

And yet, targeted policing has not achieved desired outcomes and has, instead, devastated black communities. Marijuana arrests, prosecutions, and convictions have caused direct harm by affecting eligibility for public housing and student financial aid, employment opportunities, child custody determinations, and immigration status.

Targeted policing has also impeded African Americans from participating in the legal cannabis industry. Many states do not allow individuals with drug possession charges to apply for a cannabis license. “It’s tougher for folks who have a criminal record connected to the War on Drugs to apply for a license,â€ according to Bruce Barcott, author of Weed the People.

Advocates indicate that these policies are discriminatory against people of color. “We at the Drug Policy Alliance have been pushing back against provisions that prevent people with previous criminal records as it relates to marijuana from participating in the space,â€ according to Dr. Malik Burnett. “It’s particularly invasive, given the fact that enforcement of marijuana laws have historically been biased against people of color.â€

Jared Brown currently coordinates a $25 million initiative at the United Negro College Fund (UNCF) designed to cultivate the next generation of African American innovators and entrepreneurs. He awards scholarships and administers an online entrepreneurship curriculum to more than 150 Â undergraduate scholars representing more than 40 colleges and universities. He also serves as operations director at Black upStart, an early stage social enterprise that supports entrepreneurs through the ideation and customer validation processes. He is a leading voice in the field of black entrepreneurship with publications appearing in Black Enterprise, Generation Progress at the Center for American Progress, and the Congressional Black Caucus Foundation.