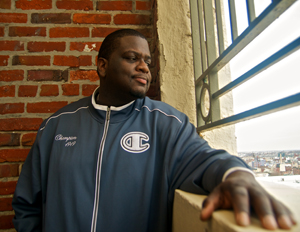 Raheem Jarbo, commonly known as Mega Ran, doesn’t quite fit the typical back story of a rapper. The 34-year-old lyricist has a bachelor of arts in African-American Studies and English from Penn State University, was a middle school educator for 10 years and views video games as his muse.

Keeping video games as his sole source of inspiration has paid off. The Philadelphia raised, Phoenix, AZ-based rapper became the first hip-hop artist to be licensed by a major gaming corporation, Capcom, and sell over 50,000 albums independently.

Jarbo represents a new wave of artists who use the Internet, social media and non-traditional marketing channels to reach new fans. And his fan base goes beyond those who traditionally listen to hip-hop. That organic reach is just one reason the PAX East 2012 presenter was able to sell all his merchandise at the popular gaming conference without dropping a single verse. BlackEnterprise.com recently caught up with Jarbo to find out how he was able to tap into his passion, transition from teaching to gaming full time and generate revenue as an independent artist.

How did you get your start in the music industry? Also, how did gaming serve as a bridge to creating music?

I started for fun in the late ‘90’s, but got my first legit start when I got a job at a Philadelphia studio producing and engineering in 2004. Since then, I recorded my own music and distributed it on the Internet and at shows. The gaming break came through the Mega Ran album in 2007, which caught the ears of Capcom (Resident Evil, Street Fighter). They offered me an exclusive licensing agreement, enabling me to open my music up to a much wider audience.

How did you get the rap alias “Mega Ran?â€

I began as Random, a hip-hop artist and producer. One year I decided to remix video game music and used my favorite game at the time, Mega Man. I put the two names together and became Mega Ran.

Last year you decided to quit your job as a teacher. At what point did you know you would be able to pursue your dreams full time?

When I released a project in 2011, Black Materia, which hit the top 25 chart on iTunes, Amazon and other music sites, I looked at the others around me on the charts and thought, “how many of these people still have a 9-to-5 job? Probably none.â€ That and the relationship I’ve built with musicians, fans and supporters gave me the courage to take the leap. I still love education and I mentor when I can.

There are various avenues to making money independently, but, at times, it is an area of concern for independent artists. How do you profit as an independent performer?

I generate revenue in three ways, mostly: Music sales, royalty payments (from TV and movie placements) and touring monies. When one gets slow, I double up my efforts in the other areas.

Securing the licensing deal with Capcom was huge. What opportunities have come your way working with a major video game publisher?

It’s been an amazing ride. I’ve traveled to places I never thought I’d go thanks to Capcom. They have been extremely helpful to me in their support. I was afraid it would break down my independent spirit, but it hasn’t. I like Capcom’s games, and they like Random’s music. It’s a mutual love and respect thing, and that’s what makes it special to me.