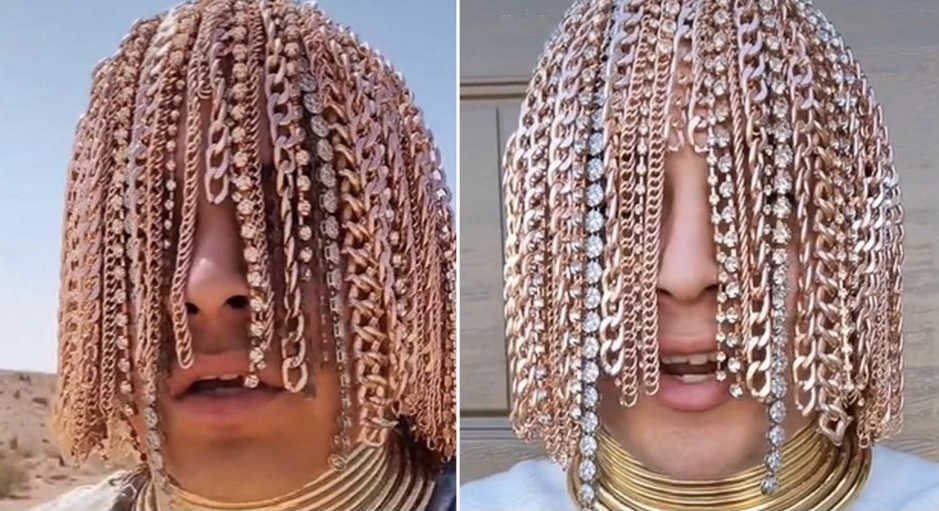 Rapper Dan Sur is bringing new meaning to an old trend of “letting your chain hang.”  The rapper has gold chains for hair and is boasting that he is the only one on earth to have them.

Sur says the chains were installed surgically. They hang from hooks that had to be surgically implanted to his scalp. Apparently, the hooks are placed all over his head, allowing him to attach the chains and sport them as if they were hair.

“The truth is that I wanted to do something different because I see that everyone dyes their hair. I hope not everyone copies me now,” he said in one of his videos. “I have it as a hook that is implanted in my head, and that hook has hooks and they are all hooked in my skull, under my skin…This is my hair. Golden hair. The first rapper to have gold hair implanted in human history.”

The rapper reportedly underwent surgery in April earlier this year.

But now Sur is getting much publicity from the new style. The Mexican rapper created quite the buzz online after a TikTok video of him went viral showing him wearing the new locs—gold chained hair with gems and diamonds on them.

Sur released a new music video donning the style, in which he added a gold grill to complement the look.

But the new do is also sparking criticism and serious conversations online.  Some doctors have raised concerns about the procedure and are cautioning others against attempting to follow the rapper. According to plastic surgeon Dr. Frank Agullo, this is a very uncommon procedure that carries immense risks.

“They introduce an easy path for bacteria between the outside world and the internal body. In this case, the bone covering the brain. In addition, I am concerned about the amount of weight these hooks are supporting,” the health expert said. “The weight or any accidental tug on a band of gold could cause the implant to dislodge and even fracture the skull,” Agullo told Yahoo Life.

The rapper has not disclosed just how much the procedure cost.