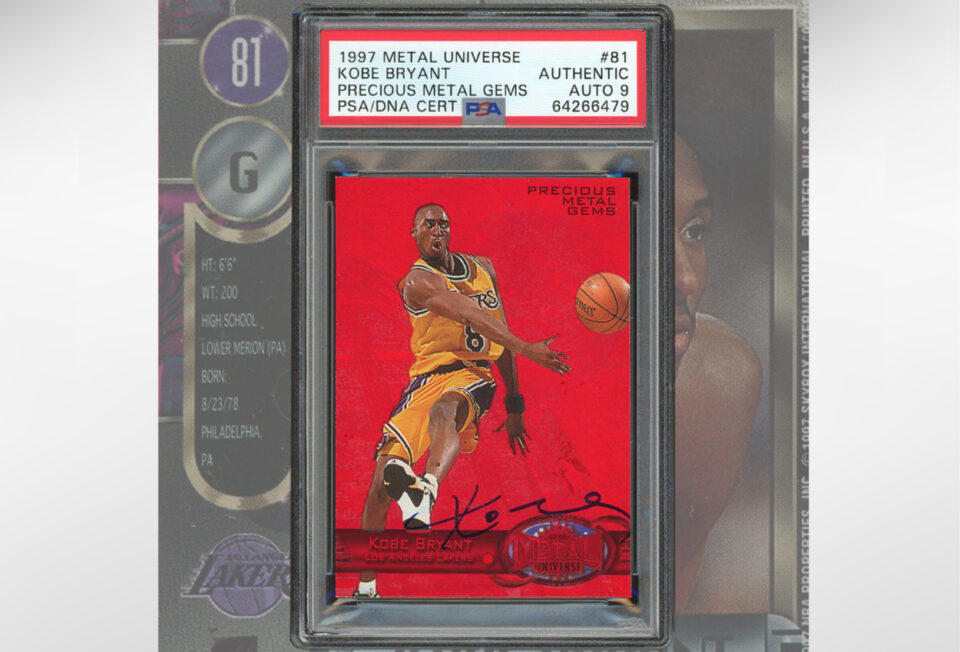 The memorabilia for NBA Hall of Famer Kobe Bryant had always been at a premium, but unauctioned items have brought record-breaking offers since his death. Another Bryant item is expected to fetch more than $1 million this weekend.

According to TMZ Sports, a basketball card signed by Bryant himself will be on the auction block. The 1997 Skybox Metal Universe Precious Metal Gems #81 card is considered one of the rarest and most coveted Bryant cards.

The card is anticipated to go for more than $1 million at the live auction.

One of the rarest and most coveted Kobe Bryant cards in existence — the 1997 Skybox Metal Universe Precious Metal Gems #81 — is up for auction. https://t.co/vYfLOYtBOt

SCP Auctions listed the item on its website ahead of time:

“Over the last two years, the hobby has seen its share of eye-popping card results, especially within the modern market. Still, only a handful can truly be described as ground-breaking and industry-shaking. Here’s one to add to the short list: an autographed Kobe Bryant #81 Precious Metal Gems card from the prestigious 1997-1998 Skybox Metal Universe set. How rare is a ’97 PMG Kobe signed by the Black Mamba himself? This is the first and only known example ever offered publicly. It could very well be the only one that exists, making it a true one-of-one grail of the late legend.”

Bryant played his entire 20-year NBA career with the Los Angeles Lakers. He was a five-time NBA champion, a two-time finals MVP, and the league’s most valuable player in 2008.

Bryant made the All-Star team 18 times and was the youngest player ever to reach 30,000 career points during his career. Bryant retired from the NBA in 2016.