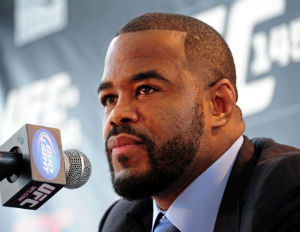 Rashad Evans will take on Chael Sonnen at UFC 167 at the MGM Grand on Nov. 16.

Saturday night will be special for Rashad Evans. He’ll fight Chael Sonnen at the MGM Grand at UFC 167 on the 20th anniversary event for the Ultimate Fighting Championship. Evans talked to BlackEnterprise.com in New York about being 14 years old watching the first UFC. He also talked about his brand and addressed his somewhat rocky relationship with Jon “Bones” Jones.

BlackEnterprise.com: You have said this year that you feel like a “young 34.â€ But you are doing other things that could factor into your career post-retirement, like the upcoming movie and work as a television analyst. Are you liking that stuff?

I do. I like it a lot. It’s all about finding ways to challenge yourself. Doing television has challenged me in ways that I didn’t even know were possible outside of fighting. It just brings a different type of feeling when those cameras are on you and you’ve got to think of something to say that makes sense. You can’t stutter and you’ve got to sound really fluid. That’s a big challenge. And I love it, man.

Has that helped your brand and visibility?

It definitely has. For the most part when I started off in MMA I was labeled as a showboat and cocky. But being on TV people get to see how I am, get to see my sense of humor outside of that little window when they’re advertising for a fight. It helps out a lot.

This is the 20th anniversary of the UFC — what does it mean to you to be at the top of the card on a special night like this?

I means a lot to me to be on the card. To be one of the main fights of that event is special because I remember where I was when the first UFC happened. I watched it. I was 14 years old and watching it with one of my best friends at the time. We were into karate and wrestling and we’d long debated about who would win based on the fighters and their styles. To see the UFC then was like everything we could have imagined. I told my karate teacher the next day that I wanted to be a UFC fighter one day. And they were, like ‘aww whatever!’ To be doing it today is crazy.

What’s your relationship like with [UFC president] Dana White?

It’s a pretty good relationship. I feel like I’m like Dana’s kid or something. You know how you can do shit right to please your dad? That’s how I feel. Like whatever I do Dana’s like “well you still didn’t do this.â€ It’s like damn, Dana! I do everything right and you still got something to say. You know what I’m saying? He comes off very critical to me but I know where it comes from. When it comes down to it, he always treats you with mad respect. We sit and we have real conversations.

In your mind, what’s the legacy of your moment in 2009 when you wore the Bill Gates shirt for Microsoft? Do you still think about that?

For me that was really the first time a mainstream company came over to MMA, really the first to start to dabble a little bit. Then more mainstream companies started coming over as if to say, you know, ‘well this is safe now.’ Companies realized that they weren’t jeopardizing their brand by being associated with UFC fighters. It was groundbreaking. At the time I didn’t really understand how significant it was until I was able to look back with some perspective. It was something huge.

Yes, they’ve come onboard. It’s really more informative than anything, informing people about the usage of corn and how it can power vehicles, how it helps us reduce waste which really helps the environment. The oil companies don’t want that stuff to come out. But they’re behind us and it’s something that people should know more about.

Is it a different feel from an excitement standpoint when you’re fighting in Vegas?

Anywhere I get a chance to fight I appreciate it and I’m thankful for the opportunity. But there’s nothing like fighting in Vegas. It’s absolutely nothing like fight night in Vegas. Goddamn, it’s something special. You can just feel it — and, you know, that’s where I was born as a UFC fighter.

With the reality show?

Exactly. Back in 2005. I remember being on that show and it was kind of a far-fetched idea, this thought that one day I’d fight at the MGM Grand. I remember driving by the hotel and thinking how cool that would be. Now, I’ve been there, I’ve headlined there and had some really major moments there. So, it’s like, this is my home. I love fighting in that environment.

That’s a good question. You really have to be in good communication with your manager and you have to be on the same page. That’s why I always say I love my manager because I trust him to make the right decisions for my brand. But it’s something you definitely need to pay attention to. You only get this opportunity to make an impact for so long. If I can brand myself the right way, this may be the only thing I have to do in life. Then I’ll be able to cash in on the brand that I created, but I have to do that work now. I have to be clear and conscious about that. We brought in some people to help us with social media. That whole scene is just blowing up. We needed some help with monetizing that aspect of the brand. My management team has been great about getting some of the best people around us. The goal is to keep advancing our brand.

Are you finding that more African American fans are getting into the UFC?

I really am. Even just walking around in black neighborhoods, I can be getting a haircut or whatever, and people know me, people know about the UFC and they know what’s going on. I kind of felt before it was something that the UFC was neglecting because they didn’t really know how to go after the market. But African American people are huge fight fans. To be able to see them recognizing me and welcoming me has been huge. Sometimes they think I’m Rampage [Jackson] though.

Do they call you that for real?

Yep. All the time.

If they see me out, they’ll say it really fast because we had that show together and everyone remembers us being on the show. Some people call Season 10 the black season.

You’ve been very vocal about Jon Jones and what you thought were some rather poor decisions on his part. But what do you make of his last fight and what do you think about what he’s been able to do in terms of emerging, really, as the face of the sport?

Well it was a great fight for him. They both fought their asses off. I gave the edge to Gustaffson and I thought he won the fight. But Jones got the nod because in order to beat the champion you’ve got to really, really beat the champion. But as far as what he’s been able to accomplish with the endorsements, my hat is off to him. Nothing but kudos to him. I’m happy for him that he’s done all that. It just shows that our sport is now getting the recognition that it deserves. I think it’s excellent.