Ray Allen's Big Shot Reminds Many of 'He Got Game' 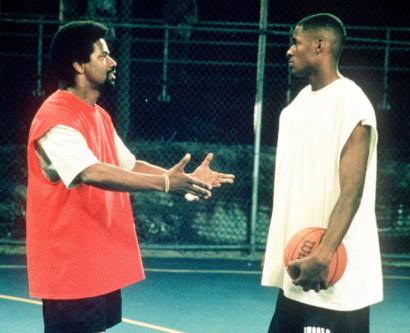 Denzel Washington and Ray Allen played opposite each other in the 1998 Spike Lee film 'He Got Game'.

Call it one big shot for Ray, one giant boost to an American classic.

Ray Allen’s big shot near the end of regulation of last night’s thriller which tied the game at 95, has social media buzzing about the twilight of the career of the Hall of Fame guard — and the Spike Lee classic which featured Allen and Denzel Washington.

The hashtag #FreeJakeShuttlesworth is trending, buoyed by Lee, who has nearly a half million followers on Twitter.

“#FreeJakeShuttlesworth For Game 7,” he tweeted. By noon, the tweet had the retweeted over 250 times.

In the film, Allen’s character, Jesus Shuttlesworth, is faced with a tough decision. His father, Jake, is let out of prison on the condition that he must get his son to play for the governor’s alma mater.

The fictional hashtag presumes that Jake Shuttlesworth was never granted release from his prison sentence and is still incarcerated.

Denzel Washington, of course, has gone on to continue his remarkable career. 2 Guns, his action comedy film in which he stars alongside Mark Wahlberg, comes out on August 2.

The actress Rosario Dawson even got in on the fun, replying to a tweet “#boriquababythankyouâ€ from a follower which said her character was “badass.â€ She played his love interest in the film.