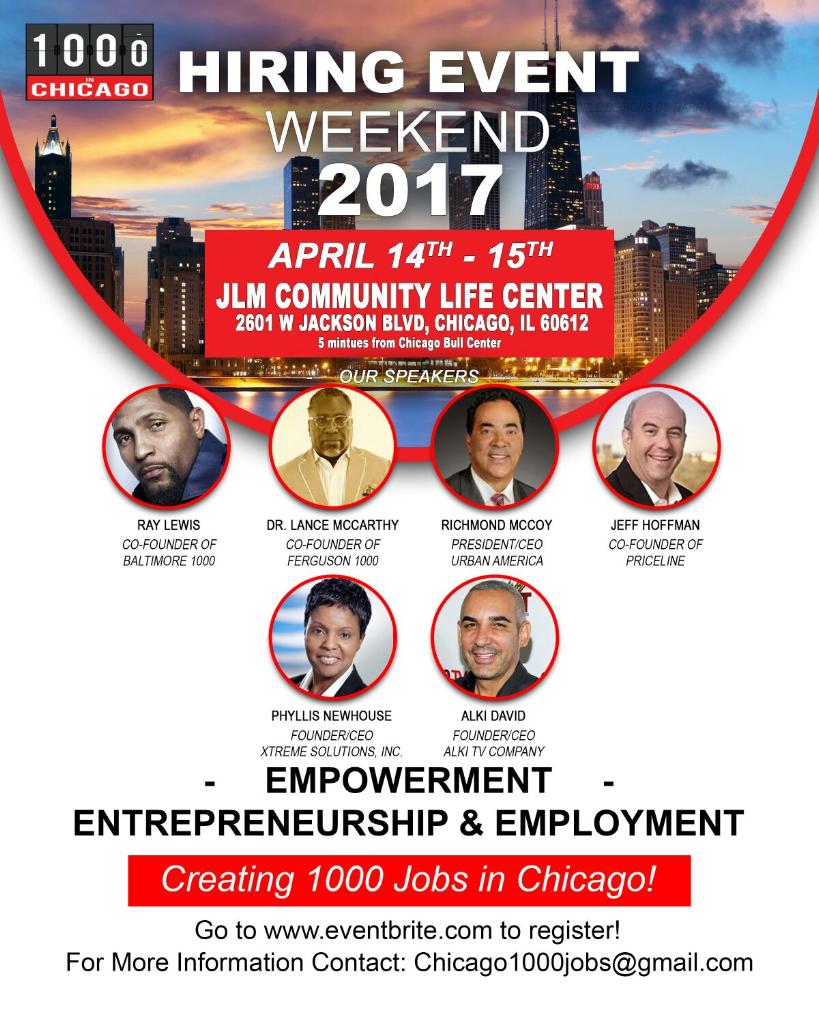 The Urban 1000 movement and hiring initiative was first developed by economist and economic development specialist Dr. E. Lance McCarthy, creating a new model that desires to level the playing field, with one of the key elements of this model being economic empowerment. The “1000” movement is an initiative to set the standard in creating opportunities for entrepreneurship, job creation, and economic empowerment through STEAM (Science, Technology, Engineering, Arts, and Math) by fostering innovation within these disciplines. In the wake of Michael Brown’s death, subsequent unrest,Â and the great need for economic relief, Dr. McCarthy was motivated to co-found Ferguson 1000, as well as to assist and spearhead the economic development of Ferguson and the surrounding areas through the creation of Ferguson 1000 Jobs Initiative.

With a highly successful debut, Ferguson 1000 Hiring Event’s aim was to bring together the St. Louis area’s largest employers to give county residents, especially those in Ferguson, job training, business development, and employment opportunities. With the first expansion city of Baltimore, he would then become a co-founder with NFL legend Ray Lewis, of Baltimore 1000 debuting in October 2016. 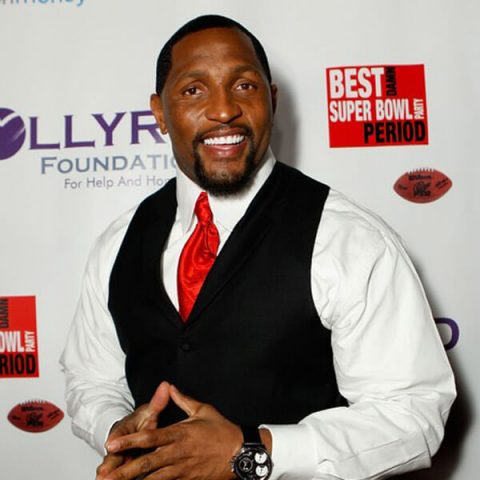 By creating a more inclusive dialogue between the leadership and the communities that they serve, when Dr. McCarthy decided to expand nationwide he felt Lewis was the perfect partner. “Ray has been focusing in urban America for years, it was a natural fit to partner with him in Baltimore,” says Dr. McCarthy. Lewis had been developing a technology company that focused on solar energy and co-founded the initiative to help create jobs in Baltimore and to grow minority tech firms. Baltimore 1000 had developed partnerships with government, corporations, universities, and others for creating jobs and growing minority businesses.

In January, following the success of Baltimore 1000, Los Angeles became the second expansion city for Los Angeles 1000. With a stronger technology focus, Los Angeles 1000 included a Black Tech Roundtable pitch portion that featured innovative technology companies such as Gun Bail, Pigeonly, BLAK Fintech (this author’s fintech startup) and others, all founded by underrepresented entrepreneurs. Even NFL royalty Jim Brown made an appearance during the Hiring Event. At the closing of the Los Angeles 1000 Hiring Event Weekend, it was announced that the Urban 1000 movement and initiative would become known as Global 1000, a Hiring Event that would have a global initiative for a worldwide impact. It was also announced that Chicago was confirmed as the next city to be added to the movement for Chicago 1000. “The overall goal is to keep duplicating the same success asÂ with Ferguson 1000, Baltimore 1000, and Los Angeles 1000 in cities nationwide,” says Dr. McCarthy.

Chicago 1000 will be the third expansion city and duplicate the success of Ferguson 1000, Baltimore 1000 and Los Angeles 1000. On April 14—15, the Hiring Event Weekend will highlight solutions for urban development to include corporate partnerships and minority business development through technology. Like its predecessors, Chicago 1000 will feature entrepreneurs, business owners, titans of industry, politicians and community organizations with keynote speakers being Priceline’s Co-Founder Jeff Hoffman; President and CEO of Urban America Richmond McCoy; NFL legend and Baltimore/LA 1000 Co-Founder Ray Lewis; Economist, Investment Adviser and Ferguson/Baltimore/LA 1000 Co-Founder Dr. E. Lance McCarthy. Additional keynote speakers for Chicago 1000 will be Xtreme Solutions CEO and Founder Phyllis NewhouseÂ and billionaire philanthropist and investor Alki David. “I am proud to be part of the movement,” says David. 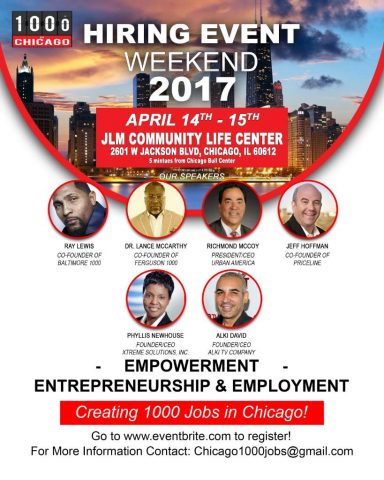 Working with some of the top companies in Chicago, the Chicago 1000 Hiring Event will have companies hiring on the spot to assist in the Chicago market in getting jobs. It will be a two-day event to include an “Empowerment Lectureâ€ on Friday, April 14 and the “Hiring Eventâ€ on Saturday, April 15. There will be Job Readiness Training before the event, free haircuts, suit giveaways, and criminal record expungement.

Dream, Hustle, and Code with Chicago Prodigy and Entrepreneur

Like Los Angeles 1000, Chicago 1000 will also have a technology focus and feature technology companies founded by black entrepreneurs to pitch their businesses for potential investment.

One extraordinary addition to Chicago 1000 will be Chicago native, prodigy, and entrepreneur Ian Brock. Brock’s current mission is to inspire kids to change their existing mindset through strategies that will help them develop a strong belief in themselves and their ability to learn computer science and coding. Most recently, his work caught the eye of Google and he was invited to participate as a panelist at Google’s “Changing the Equationâ€ event in Los Angeles. What’s so extraordinary? He’s only 12 years old!

Not impressed? Well, also consider: Brock is currently a 7th grader at Chicago’s Skinner North Classical Elementary School. He is an active member of Skinner’s State Qualifying Lego Robotics Team (co-captain), a starting point guard for Skinner North’s 2017 Division Champs basketball team, and during his free time, he’s teaching himself to code (with the help of “freeâ€ online CS and coding programs). 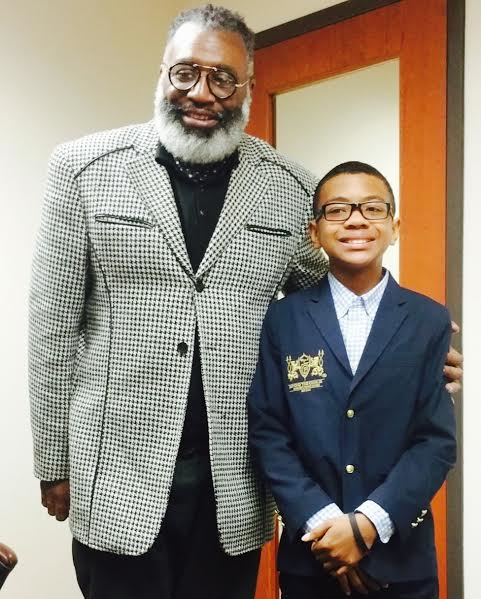 Still not impressed? Well, Brock has been working closely with his family to level the playing field for kids who are underrepresented in the tech industry. His family’s nonprofit targets economically challenged communities where computer science and coding education are not readily accessible. His initial test market research (in the volatile, high-volume world of lunchroom cookie trading) helped launch the idea and the formation of their social impact cookie company, Beyond The Cookie. Beyond The Cookie uses cookie sales to sponsor computer science initiatives. Â Brock is currently co-founder, national spokesperson, product tester (his favorite role), and part-time cookie packager at Beyond The Cookie.

Yes, there’s more! Rooted in a personal development regimenÂ since age four and based on Napoleon Hill’s Think and Grow RichÂ book model, Brock is currently conducting interviews with highly successful people from various industries to be included in his upcoming book on success for kids (written by a kid) titled, Dream Hustle Code. The idea for this book was formed through his interaction with kids who participated in computer science/coding events produced by his family. Brock discovered that in addition to having access to computer science education, the kids that they served needed to develop confidence and a strong belief in themselves. Thus, Dream Hustle Code was born. He strongly felt that a book on success, written in the words of a kid, might just resonate on a deeper level. 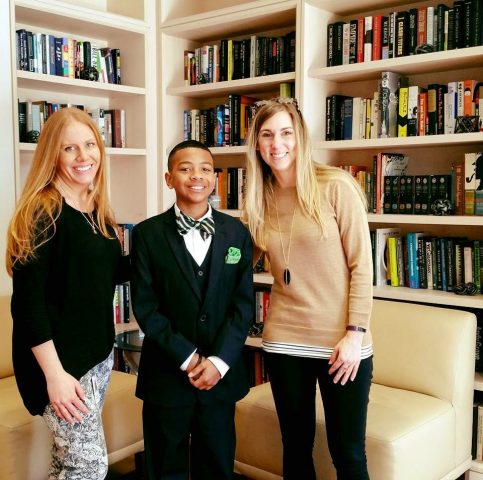 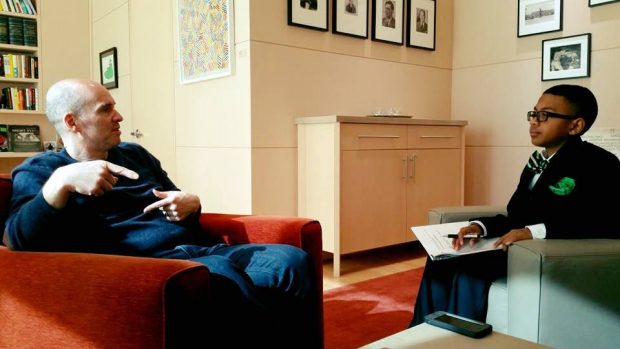 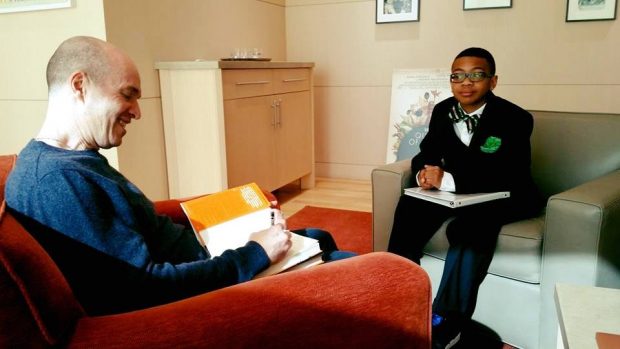 (Image: Ian Brock/Ian with Ben Horowitz at A16Z getting an autographed copy of Ben’s book, “The Hard Thing About Hard Things”)

Brock was discovered on Twitter by Forbes contributor Moira Vetter in January (see Â “The 12-Year-Old Entrepreneur That Will Take Global Tech & The World By Stormâ€). He has been featured via other media outlets such as the Los Angeles Sentinel, Venture News, and Urban Intellectuals. If that’s not enough, Brock aspires to create his own tech company, attend Harvard University, and play in the NBA (a kid’s got to have a dream). Like any average kid, in his spare time, he loves to play video games and watch videos on YouTube. But most importantly, Ian enjoys giving back to his community. One of his more memorable moments has been serving Thanksgiving dinners to feed the homeless and less fortunate. 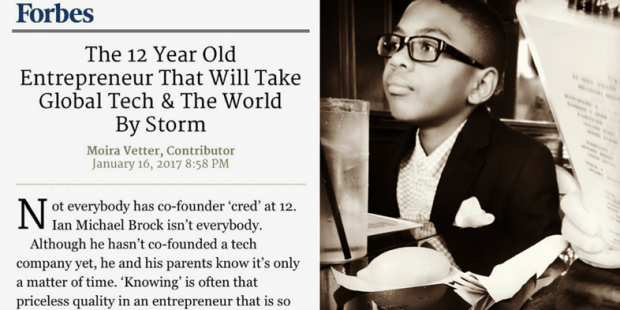 As a relentless evangelist for his mission, Brock can be found on Twitter as @DreamHustleCode consistently tweeting (and retweeting) powerful inspirational and motivational insights, quotes and suggestions such as, “More kids die from hopelessness than bullets in Chicago. Because I’m 12 doesn’t mean I can’t [do] something about it.â€ 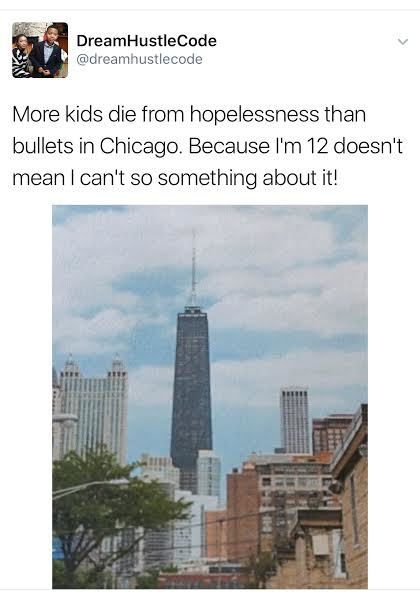 Chicago 1000 is asking participants to register online for the upcoming Hiring Event and the job readiness prep classes. Interview attire is required, and registering for the event online gives the applicants an advantage to be automatically added to a database to help match them with future employment opportunityÂ if they are not successful in getting hired the day of the event. The database can match their skills with available job openings in the greater Chicago area. Many corporate and community groups have confirmed. Speakers will be on hand to discuss employment and entrepreneur strategies. 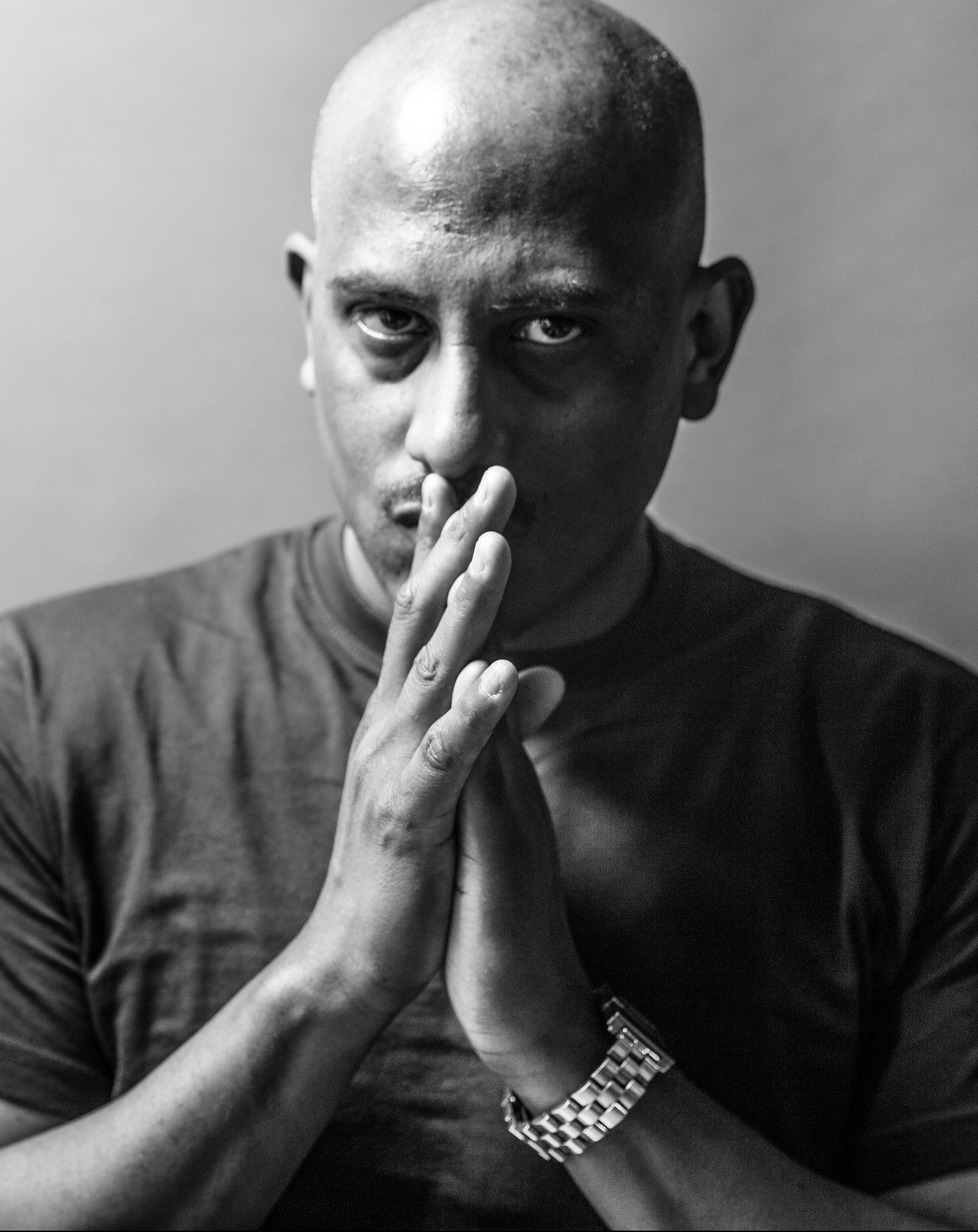 DivineÂ is a contributor for Black Enterprise and a member of the 2017 BE Tech ConneXt Summit Steering Committee.Â He is also the founder of BLAK Fintech, an online and mobile financial services and technology company, that builds affordable tech-driven personal financial and banking products, with a focus on the financially excluded and disadvantaged unbanked and underbanked.