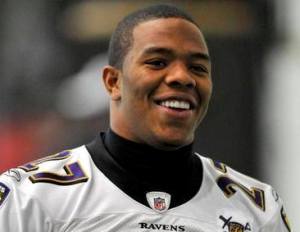 According to reports, suspended NFL player, Ray Rice, has lost endorsements from Nike and EA Sports. The fallout from the violent video released yesterday continues.

Former Baltimore Ravens player, Ray Rice, had his contract nullified by the team and has been suspended by the NFL. The league originally suspended Rice for 2 games because of a video showing him dragging his unconscious then-fiancee from a casino elevator. Footage was released yesterday showing what actually happened in the elevator as Rice threw 2 punches that knocked his current wife out.

And to add insult to injury, according to ESPN, the Ravens has given fans the opportunity to exchange any Rice jersey at their stadium stores. And to pile on, this was released on Hersh’s Pizza Facebook page, “Come trade your Ray Rice Ravens Jersey in for a free pizza at Hersh’s,â€ it continues, “These jerseys will save us money on toilet paper this week.â€