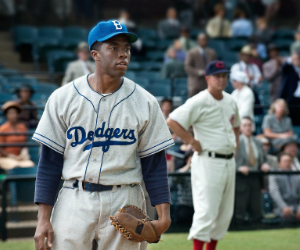 With all the hoopla surrounding the upcoming biopic, ’42’, based on the life and struggle of baseball’s first black ballplayer, Jackie Robinson, it’s almost a must that you go see this film.

It’s sure to evoke sympathy, empathy and outrage, as well as being proud of the accomplishment of the man who broke baseball’s color barrier.

Outside of the historical significance of this movie, VIBE magazine points out the reasons you should go see ’42’ and no doubt, I’m certain there will be many more.

The movie comes out on April 12th.