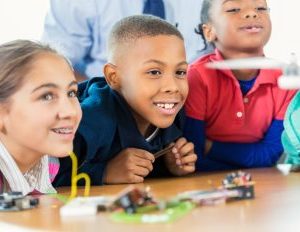 The Obama White House may haveÂ done more to address educational inequities than any presidential predecessor.

The other day I spoke with U.S. Education Secretary John King for a final interview. He looked back at what the administration has accomplished in education and areas where it had hoped to make a greater impact.

“I’m proud of the administration’s work in education over the past eight years,â€ King began.

The “more workâ€ includes significant differences in achievement among low-income students and students of color.

“African American and Latino students are more likely to attend schools where you can’t take AP courses and that don’t offer physics, algebra II, or chem,â€ King said. “And 1.6 million American schoolchildren attend a school that has a sworn law enforcement officer but no school counselor.â€

I asked King about school choice, which Betsy DeVos, Trump’s nominee to replace King, champions as a way to improve education.

“I feel very strongly that a high-quality public school system is essential to the long-term health of our economy and the long-term success of our democracy,â€ King told me.

But King, who co-founded a highly successful charter school in Boston, notes that charters can be part of the equation.

“There is a useful role that public charter schools can play, particularly as a laboratory for innovation. Some are getting phenomenal outcomes with low-income student populations.â€

King said that successful charters should be celebrated, but that they often succeed within the context of strong systems of accountability.

Where there’s a “high bar for entry, rigorous oversight of academics and school operations,â€ charters tend to succeed, he said.

“In contrast, other states have done a poor job of charter oversight and have a proliferation of low-performing charters–Michigan being one example,â€ King notes. “There is a role for charters, but it must be focused on outcomes.â€