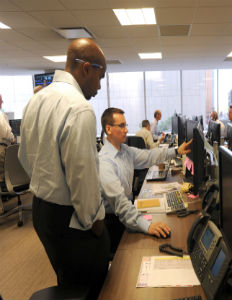 It’s been well documented that veterans returning home after serving the country often struggle to find gainful employment. Some companies have responded by creating initiatives aimed at recruiting and training former members of the military. This has been successful to a point. The Bureau of Labor Statistics reported that the unemployment rate for veterans (ages 18 and over) dropped to 6.4% in July, compared with 6.9% for July 2012, both of which are lower than the 7.4% jobless rate for Americans as a whole.

One firm whose core values include training and employing veterans comes from an unlikely place — Wall Street. According to Craig Simmons, a managing director for Drexel Hamilton, a New York City-based investment banking firm, 40% of the boutique firm’s 69 employees are veterans and 20% of those are combat-disabled veterans. Founded in 2008, Simmons says training and employing veterans is part of the firm’s DNA. “They started it with the intent to hire disabled veterans directly out of combat, out of Afghanistan and Iraq, and sometimes out of the VA hospitals and bring them into the business,â€ he says.

Simmons says income generated by the firm’s investment banking activities is plowed back into hiring disabled veterans. “There’s no other firm on Wall Street that has those types of statistics,â€ he asserts. “There may be other firms around the country that hired more veterans, but the percentage of their employees is not. We’ve been able to grow because our business has grown. ”

According to Simmons, Wall Street is great place for veterans because it taps into their leadership skills, their sense entrepreneurship and values. “Their ethics that they had in the military, they can really bring to bear. A lot of the skills that they learned actually translate into our business,â€ says Simmons, who has helped mentor and train several veterans since joining the firm. It also helps Drexel Hamilton’s business, which has a strong aerospace and defense research base. “Our employees know almost as much about the planes and the military equipment than our [non-veteran] analysts.â€

One veteran to benefit from such efforts is Daniel Morales. The New York City native and former US Marine Corps Field Radio Operator works on the firm’s equity sales desk. With bachelors and masters degrees from Binghamton University, Morales was recruited by way of an event by Veterans on Wall Street, an initiative to connect former military personnel to career and business opportunities in the financial services industry. “As far as veterans are concerned, there’s a certain direction we tend to walk because of being pigeonholed into a particular career — law enforcement,â€ says the 30-year-old. “A program like this in this particular industry is very unique and rare.â€

For Simmons, there’s a value proposition for hiring veterans. “They are highly, highly skilled people with a lot of life experience. They bring that experience to bear immediately in the work environment, and particularly in sales and trading, their high level of ethics, something we all could use,â€ he asserts. “They get up to speed very quickly. They’re very accustomed to testing and they’re execution oriented. They’re reliable and dependable.â€