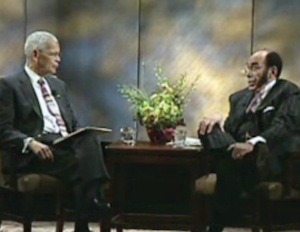 When iconic Civil Rights activist Julian Bond passed away at age 75 on Aug.15, we lost a leader, scholar, warrior, and gentleman. Also, like so many others, I lost a loyal and steadfast friend, one who believed in the potential of Black Enterprise from the very beginning and stood by my side to bring it to fruition. It is both timely and fitting that I pay tribute to my friend Julian in this, the 45th anniversary issue of black enterprise.

Bond’s legacy as a brilliant and passionate champion of social justice and civil rights is well known and established. He served as co-founder and communications director of the Student Nonviolent Coordinating Committee in the 1960s and was the Southern Poverty Law Center’s president from 1971 to 1979, later becoming a member of its board of directors. As founder of the SPLC, he also spent a decade as chairman of the NAACP. It was during his tenure as NAACP chair that I was recognized with the civil rights organization’s highest honor, the Spingarn Medal, in 1999.

Bond served in the Georgia House of Representatives from 1967 until 1975, after making headlines when he wentÂ  to the U.S. Supreme Court to force state representatives to allow him to take the office he’d been elected to. He would go on to serve in the Georgia Senate from 1975 to 1986, writing more than 60 bills that were ratified into law. A leader in education as well, he was a professor of history at the University of Virginia and an scholar in residence at American University.

Against that backdrop of activism and achievement, it could be easy to forget that Bond was also a consummate journalist with a keen understanding of the importance of black-owned media as a voice of empowerment and self-determination for African Americans. At Atlanta’s Morehouse College he helped found The Pegasus, a literary magazine, and interned at TIME magazine. In the 1990s, he was an original co-host and long-time senior commentator of the public affairs television program America’s Black Forum.

He also made his mark as a champion of Black Enterprise, serving as an original member of the magazine’s Board of Advisors at its founding in 1970. However, he did more than just show up at meetings in the executive boardroom of our New York headquarters to passively offer his opinions. Bond was also by my side in the battle for advertising revenue, accompanying me to meetings with the CEOs of companies such as Hertz Corp. to convince them to take the bold step of spending advertising dollars on the pages of a magazine for black businesspeople–a concept most could hardly fathom 45 years ago. He always made an effective, undeniable case for why being responsive to the African American consumer is key to the bottom line for corporate America, and why black-owned media is the most authentic way to do so.

In 2006, when I was inducted into The HistoryMakers African American oral history archives, during a live audience television interview in Chicago for An Evening With Earl Graves, which aired nationally on PBS, I could not have been more pleased to have Bond as my interviewer.

I am proud to have known, and to have served the cause of African American civil rights and empowerment with, Julian Bond. Like many, I have been blessed by his loyalty, support, and faith in me and in the potential of Black Enterprise. Even more, I am glad to have been his friend.

The World’s 30 Unfriendliest Cities in the World