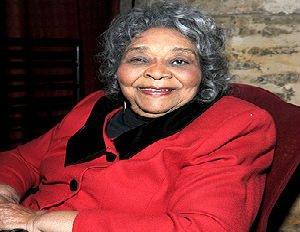 Thanks to our audacious foremothers, women canÂ nowÂ realizeÂ any andÂ every career they’ve ever dreamed of. WhetherÂ weÂ find our purpose in saving lives as a medical practitioner, closing deals in an executive suite,Â orÂ creating artÂ on the big screen, there’s no limitÂ to what we find purpose in. Through each woman’s career story, we are empowered to find our own calling andÂ fulfill it as they have theirs. As we reflect on 2014, there are several power women who leave behind their varying professional legacies to inspire us all.Â Remember these way pavers as you make your own career strides.

Juanita Moore rose to stardomÂ with much help from herÂ Oscar-nominated role in Imitation of Life. The Los Angeles native entered show business as a chorus girl in New York’s famous Cotton Club. She went on to work at Ebony Showcase Theater and became a member of the Cambridge Players. In a 1967 interview with Los Angeles Times, as reported by Hollywood Reporter, Moore said “‘The Oscar prestige was fine, but I worked more before I was nominated,’ Moore said at the time. ‘Casting directors think an Oscar nominee is suddenly in another category. They couldn’t possibly ask you to do one or two days’ work. You wouldn’t accept it. And I’m sure I would.'” Her grandson, Actor Kirk Kahn said, “‘Wherever we went she stopped and told black boys and girls they could do anything with their lives,’â€ according to Variety. Moore’s grandson says she was 99 when she died on January 1.