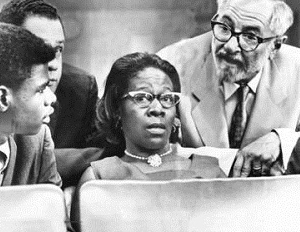 Rena Price, the African-American woman credited as the catalyst of the deadly Watts riots in 1965, died last month in Los Angeles, the New York Times reported on Sunday. She was 97.

Price, whose son was arrested by Los Angeles police on suspicion of D.U.I., is said to have disrupted her son’s arrest and physically resisted her own apprehension. Punches were thrown. Police guns were drawn. Price and her son were arrested.

The encounter went on to incite an assembled crowd to riot. Six days of violence from the riots resulted in 34 people dead, more than 1,000 others wounded and property damage estimated at $100 million.

A state commission, created to find causes for the violence, citedÂ the lack of jobs, inadequate schooling and resentment of the police. Rev. Dr. Martin Luther King Jr., who visited Los Angeles immediately after the Watts riots, blamed it on “general despair,â€ the Times reports.

Price lived in Los Angeles until her death on June 10.