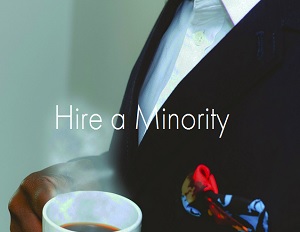 Are you looking for a revolutionary new service that allows you to quickly diversify your event?

Do you need a token black guy to add a different perspective to your upcoming panel? Well RentAMinority.com may be just the solution you’re looking for.

With a promise to provide a “minority for every occasion,” advertising executive Arwa Mahdawi started the satirical site as a way to infuse humor into the very serious discussion about America’s diversity problem.

After attending the Stupid Hackathon in New York earlier this month, where people in the tech and arts space come together to create silly project ideas that have no real value, Mahdawi decided to launch RentAMinority.com to shed light on the lack of diversity not only in the tech space, but in all industries.

“I just launched it as a joke and didn’t think it would take off so much,” she tells BlackEnterprise.com.

In less than two weeks, the site has already gained close to 400,000 page views and 190,000 unique visitors with the majority of responses being positive feedback. However, Mahdawi admits there have been a few people who took the site seriously, including someone from a bank who reached out asking if they can utilize the service.

As the upcoming Oscar awards catch heat from the #OscarsSoWhite trending hashtag which underscores the lack of diversity recognized in Hollywood, Mahdawi says one of her biggest hopes is for comedian host Chris Rock to get a hold of the website and infuse it into his jokes for the night.

“I think using humor to make a point can actually be really effective,” says Mahdawi. “I know there has been a lot of discussion about boycotting [the Oscars], but Chris Rock may be good in getting people to talk more about it.”

As a Palestinian-English woman, Mahdawi says she’s paid close attention to the ineffective diversity policies many companies have put in place and how they’ve had no positive impact on minorities.

“The biggest issue is just that income inequality is the worst it’s ever been and that tends to hit non-white people and women the most,” she says. “I would like the diversity debate to focus less on difference and more on equality and making people equal from the very beginning. You see these huge companies with diversity schemes and you see they’re not even paying their minority cleaners minimum wage.”

As Mahdawi continues to read through thousands of e-mail responses, she hopes viewers of the site take away its real message about the need to shift our thinking and approach toward diversity and inclusion.

What are your current thoughts around the way we approach diversity? Do you think over time things have gotten better or worse? Sound off with your thoughts in the comment section below.