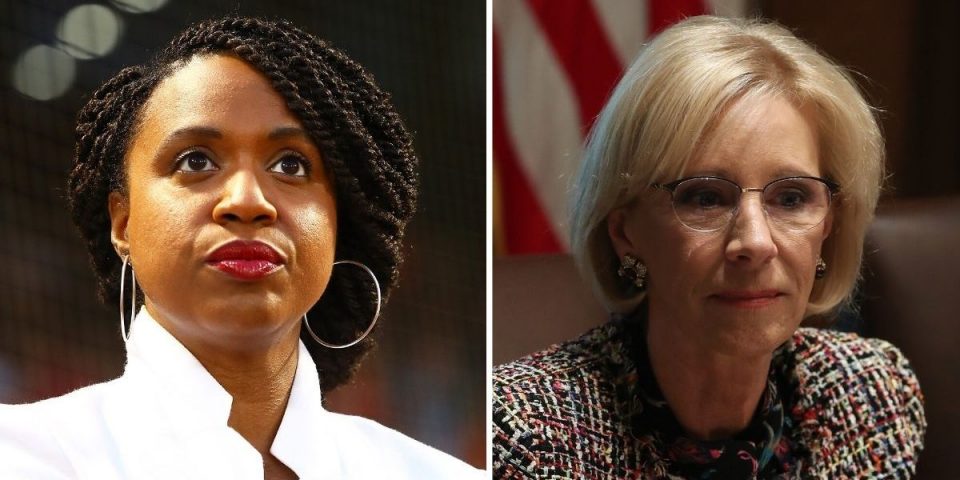 Rep. Ayanna Pressley (D-Mass.) pulled no punches in her attack against Education Secretary Betsy DeVos over her plan to reopen schools during the coronavirus pandemic.

According to The Hill, Pressley called out DeVos on Twitter saying “You have no plan Teachers, kids and parents are fearing for their lives.”

“You point to a private sector that has put profits over people and claimed the lives of thousands of essential workers. I wouldn’t trust you to care for a house plant let alone my child,” she continued.

Pressley’s words came after DeVos was interviewed on CNN’s State of The Union early Sunday. During the interview, DeVos doubled down on her call for schools to resume in-person classes in the fall and pushed back on social distancing guidelines from the Centers for Disease Control and Prevention recommending children’s time meeting in groups be limited to mitigate the spread of the coronavirus.

“What we’re saying is that kids need to be back in school and that school leaders across the country need to be making plans to do just that. There’s going to be the exception to the rule, but the rule should be that kids go back to school this fall,” DeVos told CNN. “Where there are little flare-ups or hot spots, that can be dealt with on a school-by-school or a case-by-case basis.”

Additionally, DeVos said she was “very seriously” looking at withholding federal funding from schools that stay closed in the fall despite CDC warnings saying putting children in groups “can put everyone at risk.”

President Trump threatened to do the same in a tweet last Wednesday.

“The Dems think it would be bad for them politically if U.S. schools open before the November Election, but is important for the children & families. May cut off funding if not open!” Trump tweeted.

However, the Trump administration has no control over how much money goes to schools as Congress is tasked with appropriating federal funding for schools.

Attorney generals in 17 states and the District of Columbia have filed a lawsuit against the Trump administration over its guidance to not allow foreign students to take online-only courses this fall semester.

This isn’t the first time DeVos has upset politicians. In April, DeVos blocked students in the Deferred Action for Childhood Arrivals program from receiving emergency grant aid as part of the CARES Act.