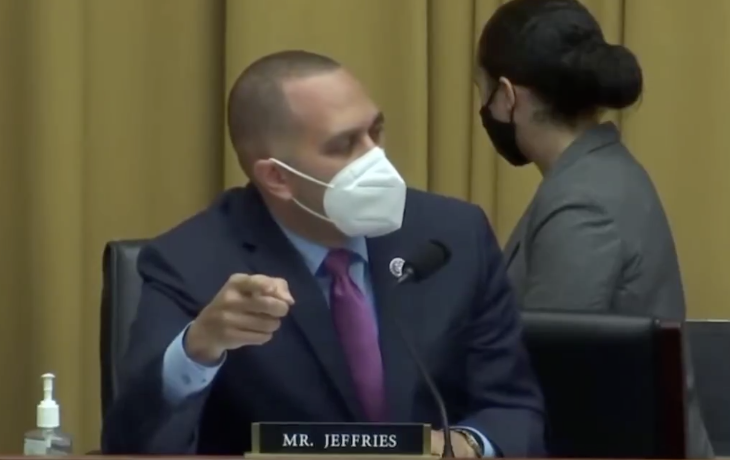 Although both lawmakers are Black, the two men are on opposite ends of the political spectrum. During the House Committee on the Judiciary meeting, Owens argued that the Pledge of Allegiance should be recited before sessions commenced, saying, “it’s not about words, it’s about actions.”

He further elaborated on his experiences in the NFL as a pro-football player. Owens detailed how he became emotional while standing for the flag and singing the “Star-Spangled Banner.”

“15 seconds to show our kids that we are adults who can agree to disagree, and we love our country enough to at least stand and represent our flag,” he said.

“We have guys making $50 million today, who will not stand for the flag because they’ve been taught by their adults not to love our nation,” the politician continued.

Owens opined that the committee should show leadership by standing together to say the pledge and display “what unity looks like” by “saying the words that bring our country together, put our hand on our hearts and meaning it.”

“15 seconds to show our kids that…we can agree to disagree, but we love our country enough to at least stand and represent our flag.

Let’s stand, let’s pledge our flag…and then we will be an example of what unity looks like.” –@RepBurgessOwens pic.twitter.com/wUPPuN5DdB

Jeffries attempted to respond to Owens, but the newly-elected leader refused to yield. Once the New York-based representative was allowed to speak, he wasted no time rebuking Owens’ argument.

“I was hoping to engage with the new distinguished gentleman from Utah, as he sat here lecturing us about patriotism,” Jeffries began, “And I was just going to ask him how he voted after a violent mob attacked the Capitol to hunt down members of Congress, to hang Mike Pence, to assassinate Nancy Pelosi, to stop us from undertaking our constitutional responsibilities as part of the peaceful transfer of power.

“More than a hundred officers seriously injured, brain injuries, head trauma, one officer lost three fingers, another officer, because of an assault on him, is likely to be blind. Officer Sicknick died, blood was spilled, two other officers are no longer with us,” he elaborated.

“And you want to sit here and lecture us about patriotism? When you voted to object to an election that you know Joe Biden won and perpetrated the big lie,” he asked.

“But the notion of you coming here lecturing us on your first day before this committee, it’s not about words it’s about actions?” Jeffries said. “You know what? Explain your actions on January 7th. When you supported an insurrection.”

This is 🔥 🔥 🔥. Rep. Hakeem Jeffries (@RepJeffries) drags Utah’s new Trump-supporting Black Republican (@BurgessOwens) for coming in on his first day and lecturing Democrats about patriotism when Owens voted to overturn the November election even after the Capitol insurrection. pic.twitter.com/mJ7cUJ0RSH

When Owens’ fellow party members tried to come to his defense, Jeffries assured his colleagues that he had smoke for them as well.

“No. You don’t really want any of this either,” the 50-year-old Democrat told the members who attempted to interrupt him.

Jeffries did finally yield to allow Owens to give a rebuttal.

Owens took the opportunity to create a false equivalent among Democrats. He asked Jeffries if it was an insurrection in 2016 when some Democrats objected to Trump’s first election results.

He answered his own question, “No, it was not.”

“You asked a question. I would just simply say, and the impeachment manager’s going to do a great job, but a violent insurrection resulted in the spilling of American blood. People died. The Capitol was desecrated. Urine and feces were left behind,” he expounded.

“The Confederate flag was bandied about. That didn’t even happen in this Capitol during the Civil War. The Trump flag was placed in the stead of the American flag. That’s an insurrection, that’s sedition, that’s undemocratic, that’s problematic, and the American thing to do is to stand up to it. I yield back,” Jeffries concluded.

Watch the full session below.