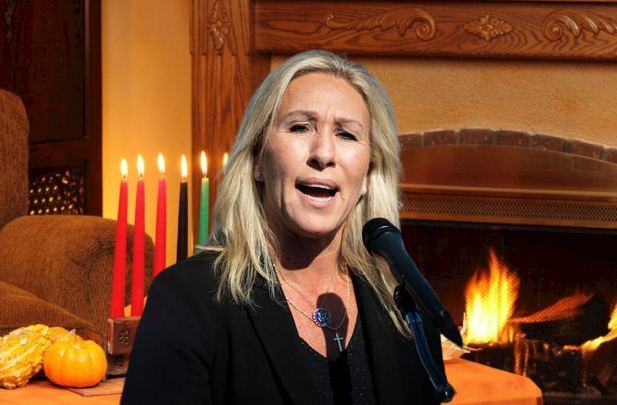 Rep. Majorie Taylor Greene has again put her foot well into her mouth calling Kwanzaa a  “fake religion created by a psychopath” on Sunday as millions began to celebrate the weeklong holiday.

Greene made the statement in response to a tweet sent by the College of Republican National Committee, a national organization of conservative college students.

“Wishing you a happy and prosperous Kwanza!” The group tweeted.

However, Greene found it offensive saying the organization was turning people away by posting the greeting.

“Stop. It’s a fake religion created by a psychopath,” Greene wrote. “You aren’t bringing in new voters, you are turning them away. People are tired of pandering and BS.”

In the response, Greene showed her lack of intelligence in Black American culture. Kwanzaa is not a religious holiday and is only considered one due to Christmas and Hanukkah occurring at the same time. Maulana Karenga, a professor and author, created Kwanzaa in 1966 during the aftermath of the Watts riots, which took place in August 1965.

Karenga created Kwanzaa as a specifically African American focused holiday beginning the day after Christmas. The name Kwanzaa is a Swahili word that means “first,” which signifies the first fruits of the harvest and celebrates the seven principals of African heritage. The seven day holiday designates each day to one of the principals which are:

During the first years Kwanzaa was recognized as a holiday, Karenga viewed the holiday as alternative to Christmas, but later changed his views stating in the 1997 book Kwanzaa: A Celebration of Family, Community, and Culture that “Kwanzaa was not created to give people an alternative to their own religion or religious holiday.”

Because of this, many African Americans observe both Christmas and Kwanzaa.

Greene’s tweet seemed to be an attack on Karenga, who according to Business Insider, was arrested for felony assault in connection with a 1970 attack on two female members of the US Organization, a Los Angeles based Black nationalist group.

Many of Greene’s Republican counterparts, including former President Donald Trump, have acknowledged the week long celebration.