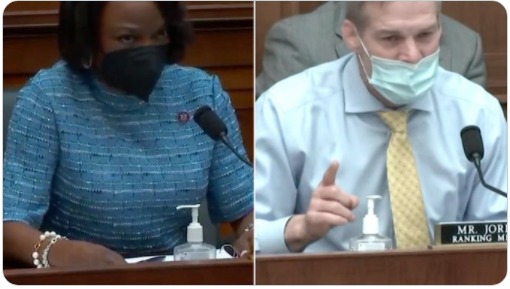 A heated argument took place between Rep. Val Demings of Florida and Rep. Jim Jordan of Ohio during a House Judiciary Committee hearing. Jordan—who is a Republican and fiscal conservative– interrupted Demings during a hearing about the COVID-19 Hate Crimes Act, MSNBC reported.

Demings represents Florida’s 10th Congressional District in the U.S. House of Representatives. Her official website pointed out that she made history upon being appointed to serve as Orlando’s first female Chief of Police in 2007.

Thus, her law enforcement background likely played a role in the clash with Jordan, since the topic of law enforcement arose during the hearing on April 20. MSNBC reported that Demings was criticizing an amendment that would prevent police departments from being defunded that was introduced by Republicans.

“ I served as a law enforcement officer for 27 years. It is a tough job and good police officers deserve your support,” Demings said at the hearing.

She further stated that it is interesting to see her colleagues on the other side support the police when it is politically convenient. Demings continued her speech by stating that law enforcement officers risk their lives every day. After she stated that they deserved better, Jordan abruptly cut in and was reminded by Demings that she had the floor.

“Did I strike a nerve?” Demings asked Jordan while banging one hand on a desk.

Demings turned in Jordan’s direction, while also saying to him that law enforcement deserves better than to be used as ‘pawns,’ then said that Jordan did not know what he was talking about. The Chairman of the House Judiciary Committee,New York Democrat Jerry Nadler, reminded that no one could shout out and restored order.

While later attempting to give context to what happened at the hearing, Demings explained her position on MSNBC. She said that the COVID-19 Hate Crimes Act attempts to address the increase in violence toward Asians.

“And I thought it was interesting that an amendment was presented by the Republican side of the aisle that talked about defunding the police,” Demings said.

She also stated that there was nothing in the legislation that talked about defunding the police. Demings said that if the topic was legislation dealing with hate crimes, she would think the Republicans, who say they are so in love and want to support law enforcement, would deal with the increase in hate crimes. Demings further stated that law enforcement was being used as political pawns.

The COVID-19 Hate Crimes Act issue has been emotionally charged before, while the issue of anti-Asian hate crimes was being addressed. The AP and PBS reported about Senate Majority Leader Chuck Schumer’s introduction of it. Grace Meng was the lead sponsor. Schumer dared his colleagues in the Senate to vote against the Democratic-sponsored COVID-19 Hate Crimes Act that he was sponsoring.

“If they do, shame on them,” Schumer reportedly said.

PBS also said that Schumer remarked that two bipartisan amendments would “strengthen” the bill. According to PBS, Schumer made the statement during a press conference in New York City. At that time, he was announcing his plans to introduce the bill later that day.

“We are saying very simply to America, to New York, to the world, ‘Stop Asian hate!’” Schumer said, according to PBS.