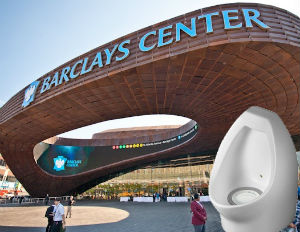 The Barclays Center, the big sports arena that opened in Brooklyn, NY, earlier this month to loud fanfare, was a source of considerable tension with locals even before it was built.

But now, some residents are saying that attendees to events are ruining a local community garden by using it as a makeshift bathroom, according to the Daily News.

For 29 years, the community garden has been a sanctuary apart from the hustle and bustle of its concrete urban surroundings, Michelle said. It features a pond and waterfall filled with goldfish, a vegetable garden and a compost pile.

In the weeks since the arena’s opening, however, caretakers of the garden have been contending with public urination and trash being lobbed over the fence.

The former problem is not confined to the garden, insist other peeved residents.

The arena’s developers say they want the public peeing to stop, and are trying to work with authorities to crack down on it.

“It is illegal, and we’re working with the police and others to make sure it’s enforced,” said a spokesman forÂ Forest City Ratner.

Read the full story at the Daily News.